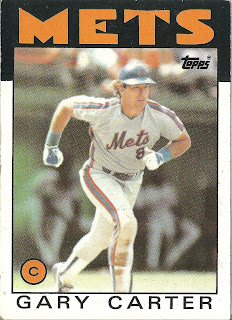 Card thoughts: Judging by Carter's facial expression and the position of his eyes, he's running out a ground ball to the second or first baseman. This post missed Carter's death by two days.

The player: Everyone remembers Carter for his offensive prowess. But he actually was an excellent receiver, especially in his younger days with the Expos. Some would consider Carter one of the top 5 catchers of all time, and it's hard to disagree with that assessment. Like Johnny Bench and Bob Boone he was exceptionally durable behind the plate. From 1977 to 1982, Carter led the league every year in defensive games at catcher and putouts.

But he did not originally come up as a catcher. Although he played that position in the minors, he was blocked at that position by Barry Foote for some reason (Foote hit .194 in 1975, Carter's rookie year). Instead, he was the starting right fielder that season, while also backing up Foote at catcher. Barry Foote also figures into the story of Carter's nickname "The Kid." Apparently, Foote's teammates kept razzing the light hitting catcher about this young phenom in the minors. They kept telling him "The Kid" would take his job--which he eventually did (there are other stories about the origin of this nickname, some say it was just because Carter was more emotional than most players). Even playing an unfamiliar position, he was good enough to make the all star team and finish second in the Rookie of the Year balloting.

The next season was uncharacteristic for Carter (but not for rookies in general). He only had 311 at bats (at total he would not sink to again until 1989), and hit a measly .219 while trying to adjust to the grind of being a starting catcher for the first time. But he came roaring back in 1977, hitting 31 home runs and driving in 84 (although he didn't make the all star team). By 1979, Carter was the heir apparent to Johnny Bench as the best all around catcher in the league, if not the game. Carter made the all star team every year from 1979 to 1988, and won gold gloves from 1980-1982. He had his first season with over 100 RBIs in that stretch, driving in 101 in 1980.

Along with Andre Dawson, Carter can be considered one of the greatest Expos players of all time. He led the league in runs batted in in 1984, but that didn't stop the Expos from stupidly trading him that year to the Mets in for a package of young players, with none except for Hubie Brooks ever amounting to much. The addition of a veteran, stabilizing presence to a young, talented, but wild team propelled the Mets to their dominating 1986 season. Despite Carter's talent (he drove in over 100 runs his first two seasons with the Mets), he was not popular with his teammates. Since most of them were jerks, I'm guessing they didn't like Carter because, as a born again Christian, he was pretty straight-laced and refused to join his teammates in their cocaine and alcohol fueled binges. They also resented his seeking of the spotlight, and perhaps were jealous of how quickly he became a sought after star by the New York media establishment. Their disdain makes me like Carter more than most other Mets.

After the 1986 season, Carter had one more good season, hitting 20 home runs and driving in 87 in 1987, before the years of catching took their toll on his production. 1988 was his last season as a starting catcher, but he didn't stand on pride like so many former stars do today. He played as a backup in his last four seasons as a player, one each with the Mets, Giants, Dodgers, and Expos.

Carter finished his career with over 2,000 hits, 1,000 runs scored and runs batted in, and a .439 slugging percentage, great numbers for a catcher. Despite this, Carter wasn't selected until the 6th ballot for the hall of fame.

After his playing days were over, Carter coached for awhile in the minors and for a small university in Florida. Most of the recent news about him has been about his struggle with brain cancer, which he finally succumbed to on Thursday. Obituaries and memorials can be found all over the 'net, but here's one from "the paper of record." 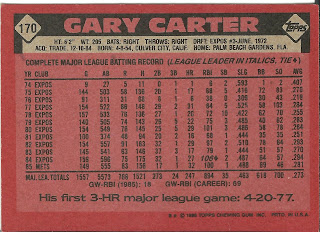 Rear guard: Even though Carter hit 3 home runs in that afternoon game, the Expos still lost 8-6 to the Pirates. All three home runs came off Jim Rooker. Two of the home runs were solo shots, but the third was a two run home run, which also plated Warren Cromartie.

This day in baseball history: In 1998, legendary Cubs broadcaster Harry Caray dies. His announcing was pretty spotty in his later years, but going back and listening his old broadcasts (including when he was with the Cardinals) make you realize how he was one of those rare announcers that could make a non-fan fall in love with the game. His voice was a big reason my allegiance as a kid was with the Cubs, not the White Sox.
Posted by Jets Break Jaws at 11:16 AM

Great post, probably the best one I've read on Carter since his passing.