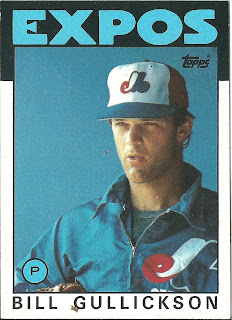 Card thoughts: This card was issued during Gullickson's "blue period."

The player: Gullickson pitched sidearm and featured a blazing (but somewhat erratic) 90+ fastball and a "slurve." He broke into the big leagues with a bang in 1980, when he set a rookie record (since broken by Kerry Wood) with 18 strikeouts in a game. Gullickson's 10-5 record and 3.00 ERA was good enough to place him second in the rookie of the year balloting. The next two seasons were a struggle, as the Expos hitters generally didn't support him in his starts, either at the plate or in the field.

Gullickson became a consistent winner at the age of 24 when he won 17 games against 12 losses, despite an ERA in the high threes. Until 1987, when he left for Japan, Gullickson always won more than he lost, and never won less than 10 games.


Gullickson was traded to the Reds in 1987, but unfortunately, Gullickson began to have problems giving up the gopher ball, and gave up an incredible 40 home runs in 213 innings in 1987. His subsequent trade to the Yankees later that season left him unhappy, so he jumped at the chance to play in Japan for the 1988 and 1989 seasons. The Japanese were fascinated by his ability to pitch, despite suffering from diabetes. A Japanese diabetes society named an award "The Gullickson Award" for a diabetes sufferer who best serves society.

Upon returning from Japan in 1990, Gullickson wasn't necessarily a better pitcher, but he pitched for better teams. After a bad season with the Astros, Gullickson signed with the Tigers in 1991, and it was a good signing as he led the league with 20 wins and 35 games started. While with the Tigers, he met a young Sam Fuld (now an outfielder with the Rays), also diabetic, who stated Gullickson inspired him to keep playing baseball.

Despite rising ERAs the next two seasons, Gullickson remained a consistent, double-digit winner. After a 4-5 record in 1994, he retired. Despite having a career ERA of nearly 4, Gullickson had 167 career wins and only lost 136. 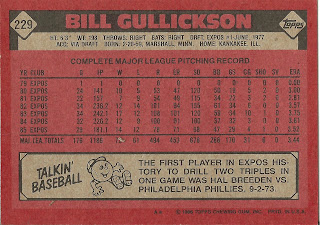 Rear guard: Hal Breeden hit the only triples in his career in 1973 (6), and it turned out to be his best season. Here's his card from that year.

This date in baseball history: In 1975, the Reds establish a major league record with 14 straight errorless games.
Posted by Jets Break Jaws at 2:17 PM

I have no recollection of his time here in Houston. I guess I wasn't paying attention, or have lost too many brain cells.