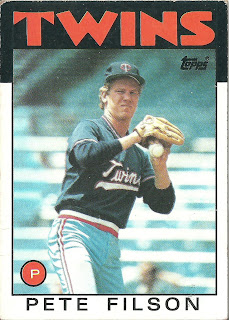 Card thoughts: For some reason, I feel this picture was taken the same day as #17 Mike Stenhouse. It looks like pre-game warm-up tosses at Yankee Stadium. This would be Filson's last Topps card.

The player: Filson was a hotshot prospect in the Yankees system. In his first three minor league seasons he had ERAs of 1.67, 2.79, and 1.89. He had an amazing 17-3 record in 1981 with the Yankees AA and A clubs. But as the Yankees were wont to do in the 80s, they traded him away to the Twins in exchange for former star catcher Butch Wynegar and mediocre innings-eater Roger Erickson. While Filson didn't exactly shine for the Twins, they did get three decent years out of him as a long reliever and spot starter. His best season came in 1984, where he threw a career high 118 2/3 innings and went 6-5.

The year shown on this card would be Filson's last as a regular reliever. He pitched 18 innings for the Twins and White Sox in 1986; 22 for the Yankees in 1987; and 35 for the Royals in 1990. Interestingly, Filson is shown throwing a pitch that year in Ken Burns appendix to his baseball documentary "Extra Innings."

After his career ended, Filson was the pitching coach for the Newark Bears from 2003-2006. He current runs a baseball school in a hard to pronounce suburb of Philadelphia, near where he grew up. 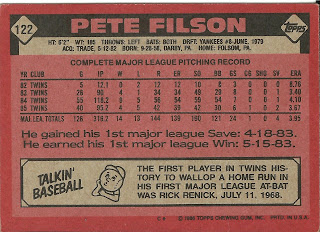 Rear guard: Filson won his first game in relief of Jack O'Connor against the Angels. He went 2 1/3 innings, gave up only 1 hit, walked 2, and struck out 4.

Rick Renick may have hit a home run in his first at bat, but he hit only 20 over a five year career, all with the Twins. The home run came off the Tigers' Mickey Lolich in the 2nd inning. Renick didn't have a Topps card representing that year (would have been a '69 card), but here's Renick's card from 1968.
Posted by Jets Break Jaws at 8:45 PM