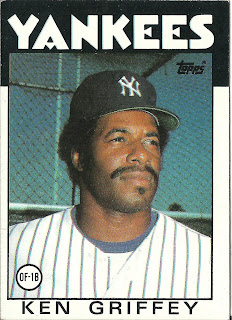 Card fact: I question the appropriateness of Griffey being awarded the coveted card ending in 0. He hadn't really been a star at this point since 1980. But at any rate, lets update our card percentages:

Topps has done a good job so far in capturing the in-game excitement of the 1985 season.

Card thought: Nice use of the batting cage for background texture. Once again, a head shot taken at dusk during spring training.

The player: Griffey is probably known to most people as being the namesake father of recent retired star Ken Griffey, Jr. But Ken Griffey, Sr. was a star in his own right, albeit never a major one. Griffey had several great years as a member of the Big Red Machine, hitting over .300 6 times in his 9 year career with the Reds. His best years were 1976 and 1977 when he was an all-star and scored over 100 runs each year. In fact, he had the chance to win the batting title in 1976. In a controversial move Griffey, who was leading the race at the time, was benched on the last day of the season. This allowed Bill Madlock who was in the second place, to take the batting crown by having 4 hits on the last day. Griffey finished that season with a .338 average, one point behind Madlock.

After his star years with the Reds, Griffey became a good regular outfielder for the Yankees and Braves, and part-time outfielder with the Reds. He ended his career with the Mariners in 1991 where he got to play with his son for a couple of seasons. In fact, the Griffeys hit back-to-back home runs in 1990. His lifetime average was a not-too-shabby .296 and he had over 2,000 lifetime hits.

After his playing career, Griffey was a longtime hitting coach with the Mariners, Rockies, and Reds. He currently manages the Reds A-ball team at Bakersfield. 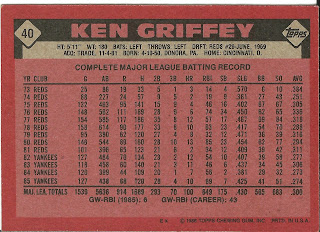 Rear guard: You can see Griffey's age started to catch up to him in 1982 as he started to play in less and less games.
Posted by Jets Break Jaws at 9:06 PM