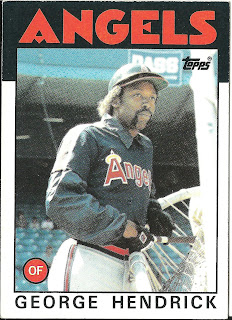 Card thoughts: I'm not really digging the upside down U Fu Manchu. It looks like he started growing it after he was traded to the Padres. The picture was taken during the Angels' September 2-4 series in Detroit, where they went 2-1. Hendrick only played in one game in the series, but almost 50% of all the hits he would get for Angels came in that game.

It's a crying shame that Rollie Fingers, a sure hall of famer, gets a card ending in "5" and Hendrick gets one ending in "0." Topps definitely had a position player bias when doling out these special "0" cards.
The player: For years, Hendrick was a reliable middle of the order hitter. Not too flashy, he just drove in 80-100 runs a year while playing for some bad teams. Like a lot of good RBI guys, Hendrick didn't walk or strike out much, and was known as a "cripple" hitter, who rarely missed a mistake pitch. His best seasons were with the Cardinals in the late 70s/early 80s. Hendrick was also the first major leaguer to wear his pants down to his ankles, a look that soon supplanted the socks-hiked-up-past-the-calf look. He was also nicknamed “Jogging George” and “Captain Easy” (for his reputation as a lackadaisical player) and “Silent George” for his longstanding refusal to speak to the media.
Hendrick began his career with the A’s (he was the first overall pick in the 1968 draft). But like a lot of young players, he found it hard to break into such a stacked lineup as the A’s sported in the early 70s. So the A’s shipped him off to the Indians with future pitching coach (then catcher) Dave Duncan for former all-star catcher Ray Fosse and infielder Jack Heidemann. Given the opportunity to start for the first time, he showed good power, slugging 21 home runs in just 440 at bats. The next two seasons he made the all-star team, which was probably more a function of the lameness of the Indians (at least in 1974) than Hendrick’s skill. His 1975 campaign was more deserving, as he hit 24 home runs, drove in 86, and hit .258.
After a similar season in 1976, Hendrick was traded to the Padres where he had his best season to date, coming in 7th in WAR (Wins Above Replacement) among position players and finishing in the top 10 in batting average while hitting 23 home runs and driving in 81.
Despite his career year, Hendrick would only last 36 more games with the Padres. Although never accused as being a clubhouse cancer, owner Ray Kroc (who knew a thing or two about customer service) was miffed the Hendrick refused to talk to reporters, sign autographs, pose for photos, or even accept awards in person. He was traded in 1978 to the Cardinals for pitcher Eric Rasmussen in one of the worst trades in Padres history. With the Cardinals, Hendrick would finally become a bonafide star.
Within a couple of years, Hendrick was driving in 100 runs and hitting over .300 for the perennially contending Redbirds. In 1980, 81, and 83 he was in the top ten in OPS, and he was one of the leaders on the 1982 Cardinals team that won the World Series. After a season which saw Hendrick drive in over 100 runs again, he hit over .300 in both the NLCS and the World Series while driving in 7 runs. Completing an incredible run with the Cardinals, he drove in another 97 runs in 1983, and 69 more in 1984 at age 34.
At the beginning of the season shown on this card, Hendrick was traded to the Pirates for Brian Harper and John Tudor (who would win 20+ games the next season), the second time he had been involved in a lopsided trade--although this time Hendrick’s subsequent poor performance was the cause. Unfortunately for the Pirates, his bat had gone lame and he hit only .225 while driving in a meager 25 runs. The Pirates cut their losses in a deadline move, moving Hendrick along with #140 John Candelaria and Al Holland for bee look-alike #114 Mike Brown, Pat Clements, and Bob Kipper.
Hendrick wasn’t much better in his first go-round with the Angels, hitting a microscopic .122 in 16 games. He was a little better in 1986, the year the Angels nearly made the World Series. Getting into 102 games as part of a platoon in right field, some of Hendrick’s stroke came back and he hit .272 while bashing 14 home runs. But this would be his last as a regular player. Playing around 60 games in each of the next two seasons, he hit in the .240s while serving as a backup outfielder. Hendrick’s last game was on the final day of the 1988 season when he grounded out to shortstop pinch hitting for Devon White.
Hendrick has coached for the Tampa Bay Rays since 2006. Prior to that, he coached for the Cardinals, Angels, and Dodgers. 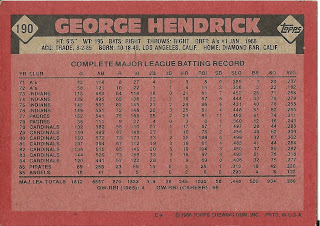 Rear guard: Hendrick played so long, it's hard to see his numbers; it's even harder to see his miniscule Angels numbers.


This date in baseball history: Wow! An event that actually involves the player in this post. Charlie Finley, owner of the A's, suggested that the league try out some orange balls during an exhibition game in 1973. Our very own George Hendrick claimed that he couldn't pick up the ball (even though he hit 3 home runs during the game!) which basically killed the idea forever.
Posted by Jets Break Jaws at 7:02 PM