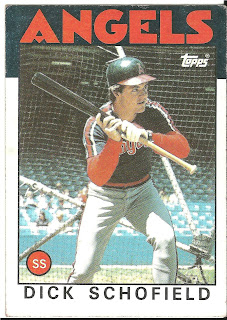 Card thoughts: Appropriate shot of Schofield bunting at Tiger Stadium. He had over 10 sacrifice hits 8 times in his career, and frequently placed in the top ten in the league in that category.

The player: This is the son of “Ducky” Schofield, a long time shortstop for many teams in the 50s, 60s, and 70s, and uncle of Jayson Werth, outfielder for the Nationals.

After being drafted in the first round by the Angels in 1981, Schofield made his debut a few years later in Anaheim. Despite having 400 plate appearances in each of his first two seasons as the Angels starting shortstop, he failed to get over 100 hits, a pattern that would recur throughout his career (he shares the record for having the most seasons with over 400 at bats without getting 100 hits). However, he was a consistently great fielder at short, which kept him in the lineup. Schofield led the league in fielding percentage in 1984, and consistently ranked in the top ten in range at short, assists, and double plays turned.

He finally had a good offensive season in 1986 to go along with his superb fielding. Schofield reached career highs in runs (67), home runs (13), runs batted in (57) and steals (23). He even got some MVP votes (most likely because of the Angels winning the division). An excellent ALCS followed, where Schofield hit .300 and launched a home run off Oil Can Boyd in Game 3. Besides the ALCS, Schofield most exciting moment that year would have to be capping off an amazing eight-run ninth inning comeback by hitting a game winning grand slam.

His following two seasons saw him continue to display pretty decent offense for someone known for his defense, although he never hit much above .250, and he never again hit over 10 home runs. But his offensive contributions pretty much disappeared after 1988. Battling injuries, Schofield didn’t manage to play over 100 games in either 1989 or 1990. Then, when he was again healthy in 1992, he was unable to hit much over .200. With young shortstop Gary DiSarcina breathing down his neck, Schofield only played one game for the Angels before being traded to the Mets. With the Mets, he injured his shoulder again and only managed to hit .195.

The injury bug bit him again in 1993 with the Blue Jays, when he broke his arm early in the season. He came back later, but by then he was an afterthought and wound up being left off the post-season roster. In his last season as a regular shortstop, Schofield got his average up to respectable level (.255), but again fought injuries, this time fighting effects from being hit in the head by a pitch.

Evidently sick of being constantly injured, Schofield announced his retirement after hitting a bare .100 as a backup infielder for the Dodgers in 1995. However, his old team, the Angels, coaxed him out of retirement after the man who replaced him at short, Gary DiSarcina, was lost for the season in August. After playing only a handful of games in 1995 and 1996, Schofield retired for good.

Since retirement, Schofield has managed his hometown Springfield Capitals (Independent) and the South Bend Silver Haws (Diamondbacks). He is currently the hitting coach for the Angels rookie league team in Tempe. 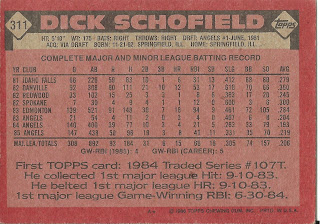 Rear guard: Schofield looks pretty chubby on his first Topps card.  He also got a "Rated Rookie" card from Donruss that year.
Posted by Jets Break Jaws at 8:19 PM

Wow, Schofield a hitting coach! That would be like making David Ortiz a defensive instructor.

Some of the least likely "hitters" are made coaches in the minors. I think it has more to do with who you know, and how willing you are to put up with the minor league life rather than any prior demonstrated hitting skill.

i love your blog and the thorough research you do , i dont know much but my jays and braves are my passion and full of useless tidbits that i have stored in this brain of mine .a quick addendum,,,in 93 dicky boy came back after the injury and played in september and was also active on the playoff roster and got a ring (although a bench warmer),,he was one of only a couple that was a no show at the big 92/93 reunion here a couple years back ( the rest are MIA Canate and T castillo and bell was in prison)