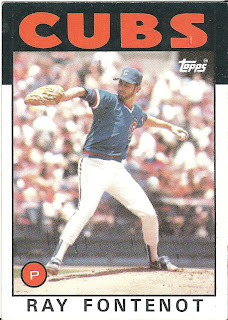 Card thoughts: I have no memory of this player, despite the fact he pitched 2 seasons with the Cubs. Maybe because he wasn’t too memorable (although some Cub fans may have had their memories triggered by Mike Fontenot (no relation) arrival in 2007).  His real first name is “Silton.”

The player: The rare Cajun in the majors, Fontenot was considered a strikeout artist in the minors, but injuries limited his effectiveness in the majors.

Fontenot was drafted by the Rangers, but only pitched rookie ball with them before being thrown in as part of the Oscar Gamble-Mickey Rivers trade in 1979. He made his Yankees debut in replacement of future friend and francophone Ron Guidry, who was injured. He only gave up one run in his debut, and went on to have a promising rookie campaign, going 8-2 in 15 starts, three of which were complete games. As the fifth starter/long reliever in 1984, Fontenot regressed a bit, but still sported a nice strikeout-to-walk ratio. He also was suspended that season for throwing at Juan Beniquez and instigating a bench clearing brawl.

Along with #284 Brian Dayett,  Fontenot was traded to the Cubs for #157 Ron Hassey, #94 Rich Bordi, Henry Cotto and Porfi Altamirano. At the time, it was believed this was a badd deal for the Yankees, as Dayett was believed to be a star in the making, and the players the Cubs sent to the Yankees were no great shakes. But it turned out to be a deal where no one came out ahead, and in the end was inconsequential to both teams fortunes.

Fontenot was coming off a really bad season for the Cubs when this card was issued. He went 6-10 with a 4.36 ERA. He gave up an incredible 23 home runs (5th in the league), about one every seven innings.  Bothered by a sore shoulder, he started the next year in the minors, and when he came back up he was put in the bullpen. But Fontenot was wild (four wild pitches, a .706 fielding percentage, and 21 walks in 54 innings) and the Cubs found a sucker, I mean trading partner, for Fontenot near the end of the season, although they only received washed up reliever #285 Ron Davis and a minor leaguer in their exchange with the Twins.

Fontenot wasn’t much better for the Twins, although he did appear on his last Topps card, a Twins cap airbrushed above what is obviously a Cubs road jersey.

In 1987, he spent the entire season with AAA Tuscon, and retired from pro ball at the end of the year at the young age of 29. 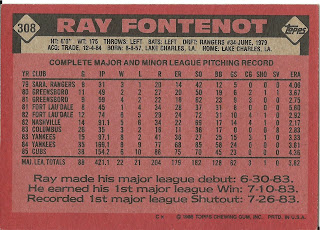 Rear guard: In the old days, when pitchers were men, they completed games if they were pitching well enough to. Note that Fontenot's first shutout came a month into his career. No worrying that if he "lost" the game in the late innings, he'd be scarred for life.

Fontenot allowed a runner per inning (6 hits, 3 walks) and only struck out 1, but he still got the 5-0 win against the Rangers for his first shutout.
Posted by Jets Break Jaws at 10:36 PM