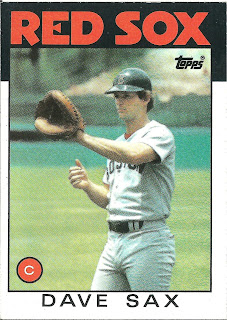 Card thoughts:  There's always something odd about a catcher without his gear on. This would be Dave Sax’s only Topps card. He was issued a Donruss card (with a stupid looking mustache) in 1984.

The player: Sax is the older brother of previous blog subject #175 Steve Sax. The Sax brothers' careers was more reminiscent of the Aarons, rather than the Alous or Uptons. Almost all of the talent in the family seemed to flow Steve’s way, although he always said that Dave was the better hitter, only he didn't really ever get a chance to prove it.

Signed by the Dodgers as an undrafted free agent the same year as his brother, Dave played with Steve at Lethbridge, Clinton, Vero Beach, and San Antonio. But while the younger brother was making his mark in the majors, Dave Sax was being pigeonholed as an organizational catcher. Many seasons, he wasn’t even the starting catcher on his minor league team.

The following season, Sax broke camp with the Red Sox as the third string catcher behind Rich Gedman and Marc Sullivan. But it took him so long to get in a game that season he was awarded the a-Trophy award, a mock award given the player that took the longest after being on the major league roster at the start of a season to get into a game (it took Sax 34 games).  Despite hitting .455, it was a small sample size, and it was back to the minors for Sax.

His final two appearances in the majors came in 1987 with the Red Sox. Afterwards, he hung on in AAA until 1992. 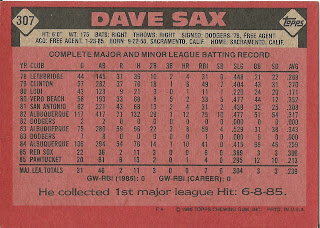 Rear guard: Sax's first hit (a single) was right in the middle of a rally where the Red Sox would score 2 runs.
Posted by Jets Break Jaws at 11:35 PM

What stunk about Sax being blocked by Marc Sullivan is the fact that Sullivan was brutal both with the bat and behind the plate.

However, he was the owner's (Haywood Sullivan) son and always had a spot on the team.

To make matters worse, the Sox collude against starting catcher Rich Gedman after the 86 season and opened the 87 season with Sullivan as their primary catcher until Gedman came to terms with the team in May.