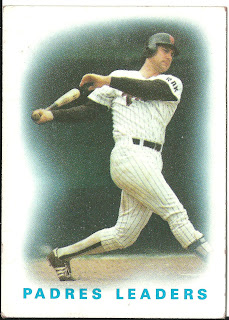 Card thoughts: The Padres, coming off a pennant the year before, slipped to third in 1985, although they were still above .500. Their record was 83-79.

The player: Okay, although it is true that #230 Terry Kennedy arrived in a trade the winter of 1980, he didn't play his first game with the Padres until April 9th, 1981. #297 Tim Lollar, who was traded at near the end of the 1985 season, made his Padres debut a few days later. Tim Flannery and #262 Mario Ramirez also made their debuts that season. 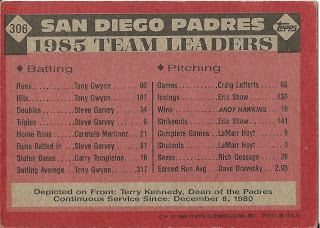 Rear guard: This card is badly miscut and more worn than usual on the corners. The one surprise on the batting side is #67 Carmelo Martinez, leading the team with 21 home runs. He'd never again hit this many.

Note the strange font on Andy Hawkins. Despite the addition of big game pitcher LaMarr Hoyt, he had the most wins on the team. The variety of the pitching leaders shows the depth of the Padres starting rotation. Every pitcher but #37 Mark Thurmond had a record above .500 and had double digits in wins.

According to the WAR statistic, the most valuable Padre was #10 Tony Gwynn.
Posted by Jets Break Jaws at 9:43 PM