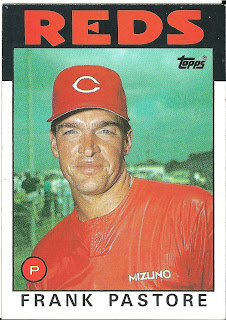 Card thoughts: Everything is wrong with this picture. Let’s go through the reasons why this may be the worst card so far in this set:
-- Pastore appears to be wearing a red garbage bag
-- Pastore’s face is greasy and has the identical
texture of his “bag” ensemble
-- The background looks like the screening of the
most boring movie ever: "The Green Parking Lot
(not a good contrast to Pastore’s “wrinkled
strawberry” look.)

It is worth noting that Pastore looks nothing like the man depicted here on any of his other cards.

The player: Pastore’s pitching motion was often compared to teammate Tom Seaver’s, which irritated the former to no end. He relied on a 90+ fastball almost 90% of the time to get batters out, but also sported a very good curve. At the plate, he was from the Carlos Zambrano school of hitting: Couldn’t bunt worth a lick, but could hit decently for a pitcher. What set Pastore back was a recurring injury to the tendon in his middle finger.

Pastore was not so great in the minors, but the Reds must have seen something they liked in him, as he was called up to the team in 1979, 4 years after being drafted out of high school. In his first stint with the club, he was a primarily a reliever but was made a starter in 1980.  Even though he’d only once had a winning record in the minors, Pastore went a surprising 13-7 for the Reds as he led the team in almost every pitching category.

Injuries led to his ineffectiveness from 1981-1983. Pastore never could manage over 30 starts or 200 innings in a time where that was considered a prerequisite for a starter.  In a 1984, a more serious injury occurred when a line drive off of #175 Steve Sax shattered his elbow.

By the time this card was issued, Pastore’s days with the Reds were numbered. After a poor spring in 1986, he was released and signed with the Twins, where he pitched a decent 49 or so innings, mopping up. After a few games at AAA for the Rangers, he retired.

In retirement, Pastore has become better known. He once ate the legendary 72-oz steak dinner at the Big Texan Steakhouse in Amarillo, TX in a record 9 ½ minutes (they are really serious about the rules for this!). The record stood for over 20 years.

Pastore continued to seek knowledge (if not eating contests) after he retired from baseball, as he pursued a variety of degrees from various universities, the most important of which would be his theology master’s degree. Pastore became a well-known Christian radio talk show host in LA. He was working this job when he was killed on his motorcycle while riding on the 210 freeway this last December. Just a few hours before, on his radio show, he seemingly predicted his own demise. 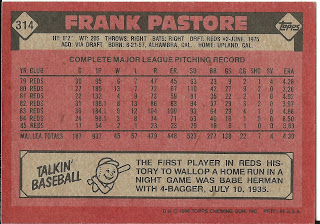 Rear guard: The night game that Babe Herman hit his home run in was not the first one played by the Reds that season: They had beat the Phillies 2-1 earlier in the season in the first ever night game in the major leagues. (By the way, does anyone still refer to the home run by the tame term "4-bagger?).

Yeah this card always gave me the creeps.