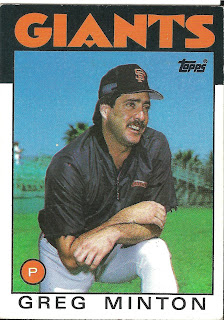 Card thoughts:  No longer considered a great closer, Minton gets a card ending in zero. He looks much better without the glasses he sported as a rookie.

The player: Minton was nicknamed “Moon Man,” originally because he got really sunburned while tubing naked (!) in Arizona, but also for the following pranks: He once flooded his home field in the minors so the season could end a day early, and he once “hijacked” the team bus in Atlanta, telling the driver that the other players had already left for the ballpark.

Minton grew up in Southern California, where he was more into surfing than playing baseball. An indifferent student, his only shot of going to college was on a baseball scholarship, which the tiny school of San Diego Mesa College offered him. An erratic throwing, spindly shortstop, he was drafted by the Royals in 1970. It would take a change of position, a trade, and eight long years in the minors before he established himself the majors.

Seemingly stuck forever at AAA Pheonix, Minton finally got a chance, by a crazy twist of fate. After severely injuring his knee in 1978, Minton had to alter his delivery which put new movement on his sinker. With this pitch, he became wildly effective. With incumbent closer Randy Moffat battling a rare stomach disorder, an opportunity opened up for Minton, which he did not miss. In fact, he was so effective early in his career that he holds the record in the live ball era for not allowing a home run for three consecutive seasons (1979-1981).

Along with Gary Lavelle, Minton formed a potent late inning combination. He made the all star team in 1982, going 10-4 with a 1.83 ERA and 30 saves. But despite saving 22 games in 1983, and 19 in 1984, his ERA was on the rise, and Minton certainly was no longer a star by the time this card was issued, having lost the closer job to Scott Garrelts and #138 Mark Davis.

Minton was mainly a somewhat effective middle reliever until he was released in 1988 and signed with the Angels. He regained his focus, and spent the final four years of his career as one baseball’s first “star” middle relievers/set up men. His 10 saves in 3 months with the Angels was his highest total since 1984, and he routinely put up ERA’s in the mid to low twos for the rest of his career.

Minton coached for a bit in the independent and minor leagues after his retirement. 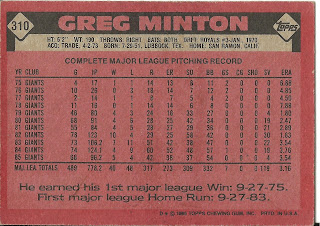 Rear guard: You don't see that "first" on the back of many pitcher's cards. Along with converting a three inning save, Minton jacked a home run off of Braves' pitcher Gene Garber that drove in Bob Brenly. It was his only career home run.
Posted by Jets Break Jaws at 10:18 PM

That '78 Minton card ranks among the worrst of all time, IMO.