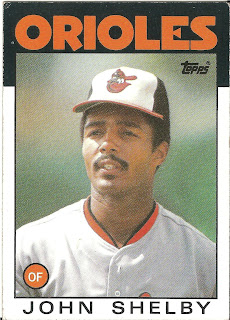 The player: I remember Shelby more from his time as a Dodger than as an Oriole. He spent 6 years in the minors before getting regular playing time in 1983. He hit .258 that season and stole 15 bases as he platooned with veteran Al Bumbry in center field. In the World Series that year, his sacrifice fly off Willie Hernandez scored #251 Rich Dauer with the game winning run in Game 4. For the rest of the series, he went 4 for 9.

Despite taking over for Bumbry as the team’s starting center fielder in 1984, Shelby’s .205 average made it hard for the Orioles to believe they had their future center fielder. They went out and signed #55 Fred Lynn, and Shelby was back on the bench until he was traded to the Dodgers in 1987.

The Dodgers who, as usual, were struggling offensively under #291 Tommy Lasorda desperately needed a center fielder that year. They were running out a rookie named Mike Ramsey for the start of the year, but he wasn’t hitting. Once John Shelby got to the Dodgers, he gave them a boost, hitting a career high 21 home runs and 69 RBIs. He had a similar season (with a little less power) the year the Dodgers won the World Series (1988). He only got 4 hits and 1 RBI in the World Series that year.

After these two solid seasons, Shelby’s numbers began to tail off considerably, and it was clear his poor bat no longer made him suitable to patrol center field regularly for the Dodgers, or any other club. After hitting .183 in 1989 (his .157 average at the all-star break was, at the time, the lowest ever for a player with 200+ at bats), Shelby was released early in the 1990 season and was signed by the Tigers about 10 days later. With the Tigers, he played infrequently, and never made it back to the majors after hitting .154 in 53 games in 1991.

The next generation of his whole family seems to be part of the game. Son John played for a time in the White Sox organization and hit .239 for the independent Gateway Grizzlies last year; son Jeremy played one season of rookie league ball for the Orioles; and nephew Josh Harrison is in the majors with the Pirates. Another nephew, Vince Harrison, was once a Tampa Bay farmhand but has been an indie league veteran the last 4 seasons.
Posted by Jets Break Jaws at 10:08 PM