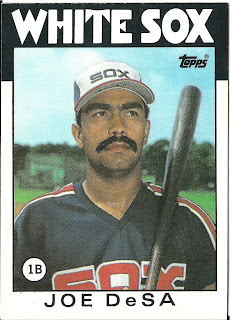 Card thoughts: DeSa looks like one of those heavies in a bad eighties action/ adventure movie. The frown certainly doesn’t help, although apparently DeSa was a friendly fellow in real life. This would be DeSa’s first, and last, Topps card.

The player: The son of Puerto Rican immigrants, DeSa grew up in Hawaii. His uncle, John Matias played in the majors for the White Sox and was issued a card in 1971 (although he is airbrushed into a Royals uniform).  Also a star football player, DeSa was more accomplished on the diamond and he was drafted out of high school by the Cardinals in 1977.

He quickly shot up to AAA in the Cardinals system, but stalled out there. DeSa in the minors was good hitter (for average) but he really didn’t have the size, or the power, to play first in the majors. He did exhibit a common major league suspicion that each bat only had one hit in it.

Blocked by Keith Hernandez (a player with a similar skill set as DeSa) and later David Green, DeSa was allowed to leave as a six-year free agent after the 1983 season.  Once again, he shone in AAA, but the White Sox had #123 Greg Walker at first, so DeSa was blocked once again.  He was probably issued this card because he broke camp with the White Sox. DeSa wasn’t up for long, but he came back to replace Walker later in the season when the latter had injured his quad.

In 1986, he was back in the minors again, and the White Sox failed to call him up when Walker once again got injured (the Sox had a young prospect named Bobby Bonilla they thought would be better). Feeling that he was out of luck with the White Sox, DeSa signed as a minor league free agent with the Royals, who wanted to move incumbent lumbering first baseman #164 SteveBalboni.

While playing winter ball in Puerto Rico that year, DeSa left a dinner party in the wee hours of a foggy morning, intending to drive back to his home in San Juan. On the way home, he collided head-on with another car on the cross-island expressway, which killed both drivers. On his last day alive, DeSa had cracked four doubles for the Ponce club.

After his death, DeSa was honored in the Buffalo and Hawaii AAA parks.  DeSa is memorialized in his death with a ball field named after him in Honolulu, a “Most Inspirational Player” award given out by the Buffalo Bisons each year in his name, and a golf tournament held in a Buffalo suburb. 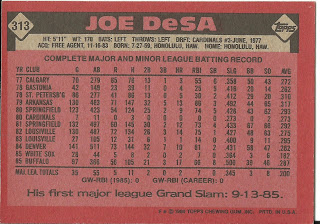 Rear guard: Look at all those minor league stops. You need to squint really hard you see DeSa's cup of coffee with the Cardinals in '80.

Although his major league stay was brief, DeSa did have a memorable game on my dad's birthday in 1985. DeSa was pinch hitting for #103 Luis Salazar when he knocked in Harold Baines, #290 Carlton Fisk, and #14 Julio Cruz.
Posted by Jets Break Jaws at 7:40 PM

I remember seeing this card for the first time at a friends house and was amazed at the guys mustache and bushy eyebrows. They almost look put on with a marker.

DeSa was a big-time hero in Buffalo during the mid-1980s. The White Sox's Triple A team was the Bisons then.

I remember watching him play in the Bisons' old stadium (in a terrible part of town, by the way). DeSa was by far the favorite on the team, fans would go crazy cheering for him.