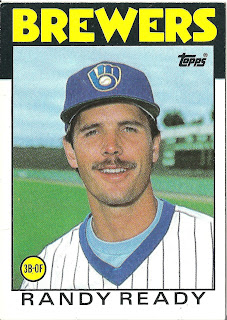 Card thoughts: Randy Ready sounds like the alias of a bassist in a hair metal band. This is one of the nicest smiles in the set. I look at this card and think, in the voice of a middle-aged matron, “What a pleasant young man!”

The player: Ready was an accomplished minor league hitter before he debuted with the Brewers in 1983 where he hit .405 in 43 plate appearances. But as a third basean, Ready was blocked by future hall-of-famer Paul Molitor. The Brewers traded Ready to the Padres midway through the 1986 season for a player to be named later (Tim Pyznarski), who had a Future Star card in 1987, but never amounted to much in the majors.

Unfortunately, soon after he was traded to the Padres, personal tragedy struck Ready’s family. His wife, a petite woman with no weight issues, was prescribed diet pills which caused her to have a heart attack, leading to permanent brain damage that left her with little motor or speech control and confined to a nursing home. Ready eventually won the largest medical malpractice judgment ever in Wisconsin against the doctor.

On the field, Ready enjoyed his best major league season. He had career highs in every offensive category, and hit over .300, to go along with an over .500 slugging percentage while playing third base, second base, and the outfield. After another two seasons of productive utility work, the Padres made a bad trade and sent Randy Ready along with John Kruk to the Phillies for Chris James.

With the Phillies, his average dropped from the .260s into the .240s, but he did almost complete an unassisted triple play against his former team in 1991. Granted free agency after that season, Ready was signed by the A’s, where he hit poorly for the division winners (3-17-.200). In his only post season at bat, he struck out. The next season Ready spent with the Expos, and it was the last that he would have over 100 at bats. While he hit better (1-10-.254), there wasn’t much advantage of carrying an over 30 year old utility man on the roster. After two more seasons with the Phillies spent mostly at AAA as an insurance policy for the big club, Ready retired.

After retirement, Ready became an decent minor league manager in the Tigers and Padres systems. In 2010, he was named the Padres hitting coach but was fired after just one season as the Padres finished in last place in the NL West, largely because of their poor hitting. 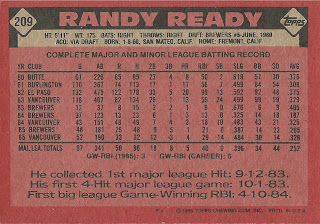 
This date in baseball history: Over 90,000 fans, the most in big league history, saw the Dodgers beat the Yankees in an exhibition game at the Los Angeles Coliseum in 1959. The occasion was Roy Campanella Night.
Posted by Jets Break Jaws at 10:52 PM

In 1992, the Blue Jays went to the World Series, not the Oakland A's. And Pyznarski was traded at the end of the 86 season, otherwise a solid entry.

I had no idea about his wife.

Proto-col Slim-Fizz is a unique appetite suppressant that contains the groundbreaking fibre Glucomannan, which is a natural soluble fibre derived from high quality pure Konjac.