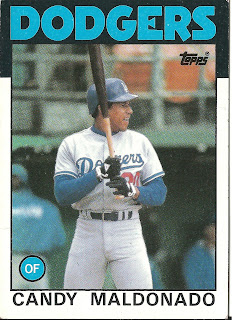 Card thoughts: Such a melodious name. Candy Maldonado. Real name Candido. Boy, did I cringe when the Cubs signed him as their "big" free agent acquisition in 1993.

The player: Maldonado was long time regular outfielder for many teams--7 to be exact. Thought of as merely a fourth outfielder by the Dodgers even though he tore up the minors, Maldonado blossomed after being traded to the Giants after the season shown on this card for go-nowhere catcher Alex Trevino. He drove in 85 runs in both 1986 and 1987 and hit for the cycle in the latter year. He gained infamy, however, in the 1987 playoffs when he dropped a fly ball by Cardinals catcher Tony Pena leading to the Cardinals only (and winning) run in game 6 of the NLCS. The Cards would go on to win the series. Luckily for me, when he went back to the post season in 1989 he did no damage against the Cubs in the NLCS (.000 average) and little damage in the World Series against Oakland (1 hit in 11 at bats).

Maldonado would parlay his success with the Giants into several lucrative short term deals in the 90s. First, he was signed by the Indians where hit a career high 22 home runs and drove in 95 in his first season there. Signed next to a two year deal with the Brewers, the team soured on him after he hit .207 in 34 games. Given away for a song to the Blue Jays, he managed to win a World Series with them in 1992 contributing with a game-winning hit in game 3 and a home run in the clinching Game 6. The Cubs, during one of their blah years, signed him to a two year deal (hey, he did hit 20 home runs and drive in 66 for the Blue Jays the previous season) to play right field and replace future Hall of Famer Andre Dawson. He was bad and lost his starting job quickly, even though the Cubs were certain he'd give their offense some oomph. He was traded a mere 154 at bats (.186 average) into his contract back to the Indians (luckily, the Cubs got popular slugging bench player Glenallen Hill in return). Maldonado cycled through two more teams before his career ended in 1995. 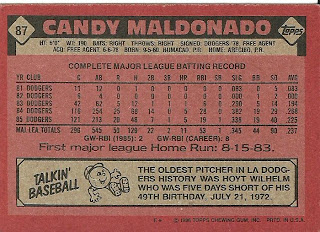 Rear guard: Maldonado's first home run was off of Giants pitcher Fred Breining in the 5th inning. It drove in catcher Jack Fimple, who I've never heard of.

Hall-of-Famer Hoyt Wilhelm was able to pitch so long because he was a knuckleballer. He was one of the premier reliever of his days, long as they were. Wilhelm did not appear in a game on this memorable date. Does it still count?
Posted by Jets Break Jaws at 10:09 PM