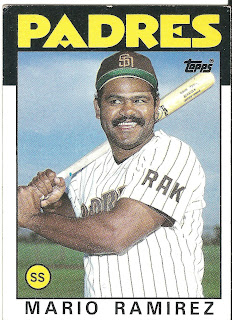 Card thoughts: This is seriously one of the weirdest cards in the set. Even as a kid, I found it hilarious. I mean, what the hell is Ramirez looking at? Does he think the camera is to the right of him? Or is he just a real goofy guy?

This Ramirez' last Topps card. He looks pretty strange on his 1985 card as well.

The player: Ramirez was drafted by the Mets in 1976, and it soon became apparent that the man simply could not hit. He never hit above .240 in the minors with the Mets, and was prone to the strikeout. Ramirez was such an excellent fielder, however, that he started the 1980 season with the Mets, despite hitting only .218 the year before. Sent down in the late spring, he hit only .208 the rest of the year in the minors.

This didn't dissuade the Padres, who drafted him in the Rule 5 draft in 1981. He still had a hard time hitting in the majors, as evidenced by his .071 and .174 averages in the next two seasons (although he at least got above .250 at AAA Hawaii those years). Ramirez finally became the full-time defensive replacement for #90 Garry Templeton in 1983 and he had a career high 136 at bats . . . and he hit a meager .196, but with a decent .634 OPS, considering his low average.

In the Padres' pennant winning 1984 campaign, Ramirez was even more horrific, hitting .119 (only 7 hits in 59 at bats!), but at least getting on base at a .278 clip. (Amazingly, Ramirez was on the major league club the entire season for the only time in his career).

Despite hitting a career high .283 the season represented by this card, the Padres realized that it was a bit of a luxury carrying a guy on the roster whose only real role was to backup one guy and who couldn't really hit. The 38 games Ramirez would play in 1985 would be his last in the majors. 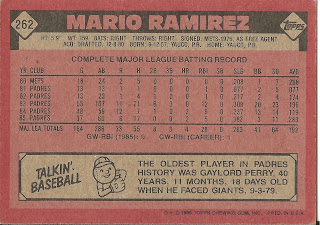 Rear guard: Here's Gaylord Perry's card from that season. Perry would go on to pitch until he was 44, ending his Hall of Fame career with the Royals pitching 5 innings and giving up 3 runs in a loss to the Angels.
Posted by Jets Break Jaws at 10:35 PM