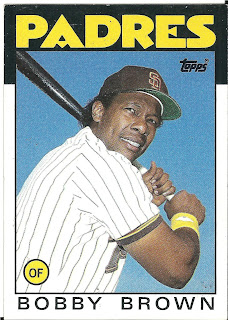 Card thoughts: This is Brown's last Topps card. And boy, does he look old.

The player: Brown took about 8 years, and 5 organizations, before he broke into the big leagues with Toronto. His big skill was his speed. Brown twice placed in the top ten in steals, including 1982 when he only got 245 at bats.

Brown was only a regular for one year, with the Yankees in 1980. He was mostly used as a reserve outfielder. Brown did get to start in the 1984 World Series when Kevin McReynolds was injured. He only hit .067 with no steals, however.

The season represented by this card was Brown's last. He only got 91 at bats, and hit a miserable .155. 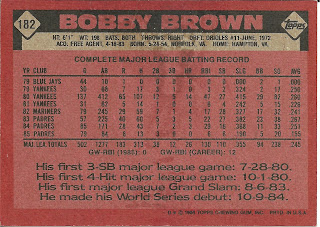 Rear guard: Oh, the dreaded gum stain. Brown's steals were off Twins pitchers Darrell Jackson and John Verhoeven. He only scored once for his efforts.

This date in baseball history: In 1901, John McGraw tried to get around the color line, by signing Charlie Grant, a black second baseman who he called a Cherokee Indian. The scheme didn't work when Charles Comiskey, owner of the White Sox, recognized him.
Posted by Jets Break Jaws at 8:02 PM