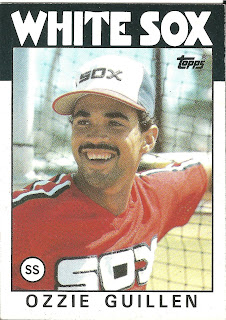 Card thoughts: This is Guillen’s rookie card. And that is a 100-watt smile. When Guillen smiles nowadays, it looks like he's sucking on a lemon.

The player: Before Guillen was the manager who can’t keep his mouth shut (you can read his various rants on his twitter account), he was a fine defensive shortstop for the White Sox, in the tradition of Luke Appling, Chico Carrasquel, and Luis Aparicio. Guillen was known for his volatile, hard-nosed play, traits he has carried with him as a manager.

Guillen came up in the Padres system, and was traded just before the season shown on this card in a big trade with the White Sox which also involved Tim Lollar, Lamarr Hoyt, and Luis Salazar. The White Sox had been weak at shortstop for years, and Guillen immediately stepped in and solidified the position. In 150 games, he hit .273 and scored 71 runs. It was a weak rookie class that year, and Guillen won the Rookie of the Year award over the more deserving Mark Salas and Teddy Higuera.
The next 13 years, Guillen was the starting shortstop for the White Sox. A typical season for him in his prime years (1987-1991) saw him steal about 20 bases, and drive in and score about 50 runs. Defensively, he generally placed in the top ten in range factor, putouts, and assists by shortstops. One thing that limited Guillen’s effectiveness as a hitter was his aversion to taking walks. He never walked more than 26 times in a season, and often only 15. With today’s metrics, Guillen was a pretty useless hitter, with an OPS at its peak barely over .650. On the other hand, he almost never struck out, and his obsession with hitting his way on and lack of power led to a lot of weak ground balls.

In his prime years, Guillen went to the All Star Game 3 times, and earned his only gold glove in 1990. He severely injured his knee in 1992, and only appeared in 12 games that season. After coming back full time the following year, Guillen found his range severely limited, and his speed almost gone, further eroding his already limited offensive skill set.

He managed to remain the Sox starting shortstop until 1997, after which he was signed a free agent by the Orioles. In a move that will surprise nobody, Guillen proceeded to rip the White Sox after leaving, saying that the reserve infield of his new team, the Orioles, was better than the White Sox starting infield. But in a bit of schadenfreude, Guillen flamed out quite quickly with the Birds, as he was released a month into the season after getting only 1 hit in 16 at bats (an .063 average). This was a signal that his starting shortstop days were over.

He was quickly snapped up by the Braves where he spent the remainder of that season and the next as a utility infielder. As usual, Guillen’s years with the Braves were not without incident. He was instrumental in rescue efforts in his native Venezuela during the mudslides in the winter of 1998. Unlike many stars that just gave money, Guillen actually directly helped the efforts in some of the most devastated areas. He also was mentioned in John Rocker’s infamous Sports Illustrated rant, when (among other things) Rocker complained that Guillen (filling in for the injured Walt Weiss) missed a seeing-eye single up the middle by John Olerud in Game 4 of the NLCS because "we had a 38-year-old guy [actually 35] playing shortstop, and he can't make that kind of play."

The Braves actually must have seen some truth in Rocker’s words, as Guillen was cut in spring training the following year in favor of a slick-fielding 19-year old who had never played above Class A named Rafael Furcal. He latched on with the Devil Rays to back up Kevin Stocker, and ended his career there in 2000.

Guillen immediately began coaching after he stopped playing with the Expos and Marlins. Hired on by the White Sox as a manager in 2004, Guillen won the World Series the next year. He won about 5 more games than the pythagorean method predicted, thus cementing his reputation as a canny, maverick manager, much in the mold of Casey Stengel or Billy Martin. Like the latter, Guillen courted controversy, whether it be publicly shaming players, baiting opposing team's fans, or casting homophobic or misanthropic insults at beat reporters.

Despite Ozzie's success in Chicago, his mouth finally ran him out of town. Casting all good sense to the wind, the Marlins spirited away Guillen (still under contract to the White Sox after being fired) for a couple of minor leaguers. With the Marlins this season, an expensive roster tanked, and Guillen publicly feuded with the local fanbase, the owner, and some of the players. Too bad he's got a bunch more years on that contract. 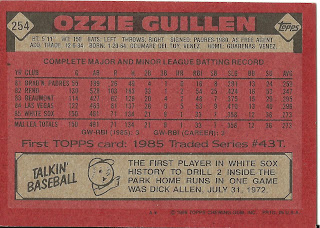 Rear guard: It's appropriate that Dick (also known as Richie) Allen would appear on this card, as he had a similarly fraught relationship with the fans/press/management as Guillen. Allen won the MVP in 1972, one of his best seasons, leading the league in home runs, RBIs, walks, on-base percentage, and OPS. Although not a base stealing threat, he did have random occasions when he stole more that 10 bases, including this one, which attests to his baserunning smarts.

Allen's 2 inside the park home runs that night tied a modern American League record. Both were drives to center that the Twins outfielder, Bobby Darwin, fell down on. Here's Allen's card from that season.

great post, very thorough, especially when his career ends and transitions to the ass clown manager we know today.