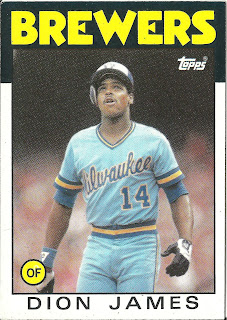 Card thoughts: What in the world is James looking at? A bird in flight (more on that later)? A person threatening to jump from the upper deck? A lazy "fowl" pop up down the left field line?

The player: A former #1 draft pick, James had a great season for a rookie in 1984, winning the Brewers centerfield job and batting .295. The next year, the year represented by this card, he twice dislocated his shoulder and only got into 18 games, hitting a poor .224. The injury set his career back, and he spent all of the next year in the minors before the Brewers gave up on him. He was traded to the Braves for another disappointing former #1 draft pick Brad Komminsk. James flourished in 1987, having his best season, leading the league in fielding percentage, and hitting 10 home runs with 61 driven in while batting .312. He also killed a bird in flight with one of his 37 doubles. He still hit well with the Braves the following two seasons, but his defense regressed and he was traded to the Indians for yet another former #1 pick, Oddibe McDowell. He became a backup first baseman/outfielder for the Indians, hitting .290 with the club over 1 1/2 seasons. Injury struck again, however, and he had to have ulnar nerve surgery which kept him out the entire 1991 campaign. After four seasons with the Yankees where he got one more chance to start in 1993 (hitting .332), he retired with a career average of .288. 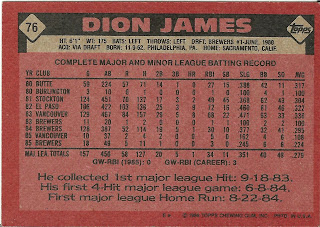 Rear guard: The Brewers lost James' 4-hit game to the Red Sox, 11 to 3. He got all 4 hits off of Oil Can Boyd, who pitched a complete game despite giving up 11 hits and 2 walks.