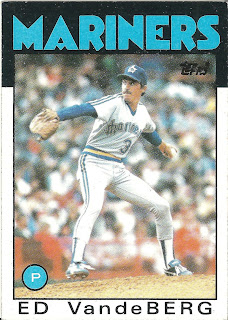 Card thoughts: That is a lot of lower case letters! Topps struggled with how to spell Vande Berg's name throughout his career. He appeared as Ed Vande Berg on his cards up until 1985; Topps used it again in 1987; then back to the lowercase/one word format in 1988 and 1989.

The player: Ed Vande Berg may have been one of the first lefties to be used exclusively against certain hitters. At a time when most relievers averaged over an inning per appearance, Vande Berg pitched less than a inning in each of his appearances in his first two years.

Featuring a late-breaking slider and overpowering fastball, Vande Berg was fourth in the Rookie of the Year voting in 1982 after pitching in a league-leading 78 games, with a 2.37 ERA. He had another good year in relief in 1983, but the Mariners couldn’t leave well enough alone, and tried to use him as a spot starter the next season, but he only had 29% quality starts, and the experiment was abandoned in 1985.

Vande Berg was traded to the Dodgers late in 1985 for #32 Steve Yeager (the Mariners had previously attempted to trade him to the Red Sox for Mark Sullivan). Pitching in spacious Dodger stadium where home runs go to die, Vande Berg went 1-5 with a 3.41 ERA, but was considered a bust. He was even worse with the Indians and then the Rangers, where his ERA was consistently above 4. After his release by the Rangers, he hooked on with the Cubs AAA Iowa affiliate, where he saved 10 saves as the team’s primary closer. Three more years at AAA (with Calgary) produced ERAs of  8.27, 4.26, and 8.93., and then he was done save a token appearance with an Independent League club in 1997. 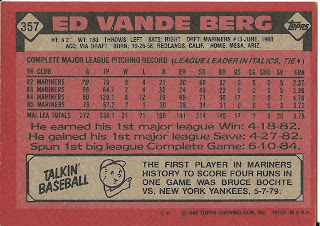 Rear guard: Now Topps spelled Vande Berg's name correctly on the back. Anyway, his first complete game was a loss against the Indians the first game of a doubleheader. He gave up three runs on 10 hits, striking out four.

Bruce Bochte drew three walks (and had one hit) on May 7, so there was a lot of firepower behind him to move him all the way around the bases. Bochte had a career high with 81 runs scored in 1979. Here's his chaw-filled face on a card from 1980.
Posted by Jets Break Jaws at 9:26 PM