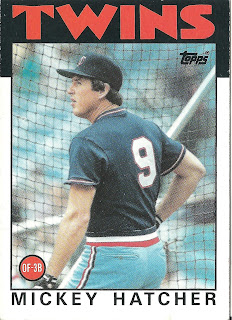 Card thoughts:  Hatcher wore both number 44 and 9 in his career. A well-known prankster, Hatcher sported a giant glove on his Fleer card from this year.

The player: Hatcher was a top notch prospect with the Dodgers whose fielding issues and lack of power limited his utility as a major league player. Although he didn’t draw many walks, he’s always sprint to first when he got one.

At every stop in the minors, Hatcher hit in the .300s (including .371 at Albuquerque in 1979). But he had the misfortunate of being in the Dodger system in the late 70s, which was brimming with hitting prospects, and he was also blocked by Ron Cey in the majors. Having no place for a poor fielding third baseman with a line drive stroke, the Dodgers shipped Hatcher was to the Twins in 1981 for Ken Landeraux. Installed as the regular left fielder, he hit around .250, with doubles power, but his defensive shortcomings (largely through indifference) made him worse than a replacement player.

That all changed in 1984, when Hatcher had a career year. Playing in a career high 152 games, he was in the top ten in doubles, and drove in 69 runs with a .302 average. He was still hitting well when kids pulled this from packs in 1986, but his power was dropping, and a .673 OPS is pretty low when you’re playing in the Homerdome.

Hatcher would not be around to contribute to the Twins 1987 World Series run, as he signed with his original organization, the Dodgers, in 1988. This time, he had more success with the team. In 1989, he hit .293 in the regular season as a backup outfielder, and replaced #295 Kirk Gibson in the World Series, batting third. The Dodgers (after Game 1, of course), didn’t really miss Gibby, as Hatcher went on to slug .727 in the series, with 2 home runs and 5 runs batted in.

With Gibson out a lot of the following season, Hatcher got into many games in left and he contributed a .295 average. But a .212 average in 1991 led to his release. Post-retirement, he managed in the minors and had been the hitting coach for 12 years with the Angels before he was fired last year when Albert Pujols and the rest of the team weren’t hitting a lick. 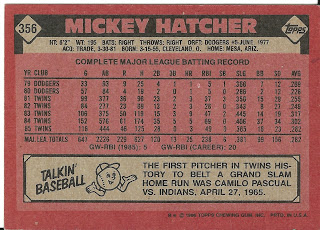 Rear guard: Camilo Pascual was known for his awesome curveball, that allowed him to win over 20 games twice. He was a decent hitter who drove in 19 runs one season. In his career, Pascual hit 5 home runs. Here is his 1966 card.
Posted by Jets Break Jaws at 9:37 PM