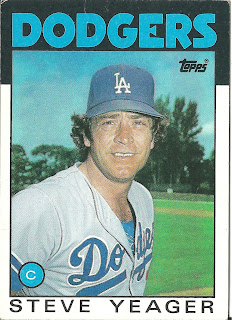 Card thoughts: Steve Yeager looks about 80 years old in this picture. That's what playing in the California sun for 14 years will get you. He's definitely going for the Tom Jones look here.

The player: Yeager was part of those great, deep Dodger teams in the 70s. Those teams were such an offensive juggernaut, a guy like Yeager with his .228 career average with the Dodgers ended up starting from 1974-1979. Although he was a poor hitter, he was an excellent defensive catcher. He led the league in caught stealing percentage with 46.7% in 1978 and 43.1% in 1982--this at a time when stolen bases were much more prevalent. His best season offensively was in 1977 when he hit 16 home runs, drove in 55 and hit .255 in 125 games. He would end his career a year after the one shown on this card with the lowly Seattle Mariners.

Off the field, Yeager was a bit of a playboy. The nephew of "American hero" Chuck Yeager, Steve was buddies with LA mayor Tom Bradley, so the mayor married him on the City Hall steps in 1982. Don't let the face like an old catcher's mitt fool you: He also posed for Playgirl (no link, this is a family site!). On a more serious note, teammate Bill Russell's bat shattered and hit him the neck, piercing his esophogus. He almost died. To protect his throat from future injury, he invented the throat guard all catchers wear today.

After his playing career, Yeager managed a few independent league teams in California, and was a hitting coach for a couple of Dodger farm teams. He's currently in charge of the Dodgers Legends Bureau, which I guess is like a speaker's bureau for ex-baseball players? I don't know. 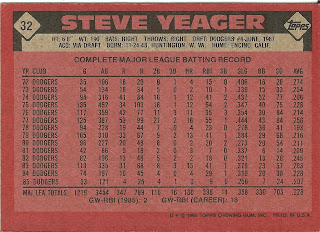 Rear guard: Oh, what changes arbitration has wrought. You don't see this too much in baseball anymore: A guy used to start with a team, remaining on for years afterward as a backup. Nowadays, old players are just too expensive to keep around, what with the automatic raises based on seniority, not performance.
Posted by Jets Break Jaws at 9:50 PM