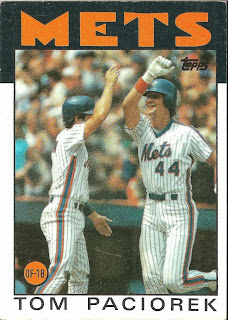 Card thoughts: Second high-five picture in the set! And since Paciorek only hit one home run in a Mets uniform, we should be able to identify the circumstance, and his mysterious high-fiving partner. This picture was taken on August 15, in the first inning. Paciorek was the second batter of the game, and he drove in leadoff man, #191 Wally Backman, who had earlier taken a walk. As a child, I pronounced his name “Passiorek.”

The player: Paciorek, who was nicknamed “Wimpy” for some unknown reason, was the most successful of three baseball playing brothers.  One of the myriad of great hitting prospects the Dodgers had in the early 70s, like of many of those players he tore up the PCL, driving in over 100 runs three straight seasons (1970-1972).  Despite this, he was unable to make it to the majors for more than a cup of coffee until 1973. When he did, he was blocked at first by former Spokane teammate Steve Garvey, and in the outfield by a trio of solid veterans (Manny Mota, Willie Davis, and Willie Crawford). Paciorek never would get a chance to be more than a fourth outfielder in LA, as in the next two seasons youngster Bill Buckner and import Jim Wynn would take up the majority of the outfield playing time in left and center, respectively.

Suffering from lack of playing time, Wimpy’s average dipped to .190 in 1976, prompting a trade to the Braves. He still was in a reserve role, but the Braves starting outfielders were far inferior to the Dodgers, so his playing time increased accordingly. Playing in 110 games, Paciorek hit .290 with a league average OPS. He slumped in 1977, and was bad in spring training the next year, prompting the Braves to put him on waivers. He cleared, and went to Richmond for a week. However, he was added to the 40-man again when Gary Mathews separated his shoulder. After only 5 games, he was once again put on waivers, but this time the Mariners claimed him when he failed to report to the minors. Paciorek finished the year strong, hitting .299 for the Mariners.

Paciorek finally got a chance to be a full-time player in 1981, and he made the most of it. Unfortunately, the season was strike shortened so we’ll never know what Paciorek could have done in a full season. He did make his first all star team, and even was tenth in the MVP voting. Top 10 rankings in hits (fifth), total bases (third), OPS (fourth), batting average (second), slugging (fourth), runs batted in (sixth), and doubles (third) made his case, although it is doubtful that those numbers would have held up over a full season.

Then the Mariners foolishly traded him to the White Sox for three nobodies (Jim Essian, Todd Cruz, and Rod Allen). Paciorek would hit over .300 his first two years with the White Sox, and would be their starting first baseman in 1983, the year they went to the ALCS (he hit .250 in the series). The next year, he would set a record by getting 5 hits in a 25-inning game, the most for a player who didn’t start the game (he entered in the fourth inning).

With the Mets breathing down the Cardinals neck in 1985, the coveted some veteran help off the bench to complement their young squad. Paciorek joined the team in July, and hit .284 down the stretch. He would not be able to enjoy the Mets success in 1986, however, as he was playing with the Rangers by then for his final full season.

Paciorek has remained well known in Chicago, particularly for his color commentary on White Sox games from 1988-1999 with the unlistenable Hawk Harrelson (I found “Wimpy” to be the only tolerable thing about watching the Sox). He subsequently did color for the Tigers, Mariners, Braves, and Nationals. His name was once again in the news a few years ago when he accused Rev. Gerald Shirilla of molesting him and his brothers when he was teaching at St. Ladislaus High school. 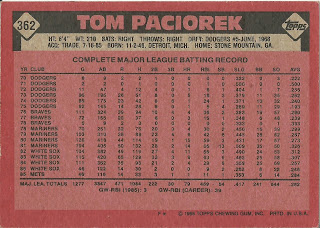 Rear guard: If you squint hard enough (or just click on the above image) you'll note that Paciorek played in exactly the same number of games with the White Sox and Mets in 1985, and had near identical offensive numbers.