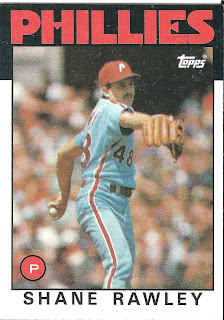 Card thoughts:  I believe Rawley is throwing to first here.

The player: All of Rawley’s pitches moved—a lot. This was at a time when the fastball generally wasn’t expected to move a lot. However, he had a hard time controlling that movement, which led to inconsistency.

Rawley was the rare 70s reliever who was later turned into a starter—and succeeded (most of the transitions were in the other direction).  He was in the Expos and Reds minor league systems before getting a chance with the Mariners in 1978. Filling a variety of roles in the bullpen (long man, co-closer, spot starter), Rawley was consistent, but not spectacular for the Mariners. His best season was in 1980 when he saved 13 games and had a 3.33 ERA.  His best stretch of success came the next season when he earned Player of the Week honors on September 21, when he saved or won, all of the Mariners victories that week.

Rawley was traded to the Yankees in 1982, and they put him into the rotation at the end of July. He struggled a bit, as his ERA was 4.22 as a starter, compared to 3.66 as a reliever. But Rawley showed enough promise that the Yankees put him in the rotation full-time in 1983, where he went 14-14 with a career high 13 complete games and 238 1/3 innings pitched.

Rawley battled fatigue injuries throughout the first half of the next season (sore back, ribs, and shoulder). The shoulder injury was disguised by the Yankees, claiming that he had a sinus infection, in order to keep open the possibility of a trade. He was finally traded to the Phillies for moon-faced Marty Bystrom. Rawley’s record for the Phillies the rest of the year was impressive—10-6 with a 3.81 ERA—but his addition failed to help the Phils retain their first place position in the pennant race.

With the Phillies, Rawley became a dependable, if not spectacular, starter, while struggling to stay healthy. He earned an all-star berth in 1986 (which postponed his wedding), but only won 11 games as he was shut down in August after breaking a bone in his shoulder. With all the injuries, it was surprising to everyone to see Rawley pitch an entire season in 1987, leading the league in games started. His 17 wins were second in the league, but his peripherals were much less impressive (second with 112 earned runs given up, second in hits allowed with 250, and eighth in walks with 86). Much less lucky the following season, his 8-16 record was singularly unimpressive, and he was shipped off to the Twins for some ex- Cardinals (Tom Herr, #88 Tom Nieto).

His record didn’t improve much there (5-12, and 5.21 ERA), and Rawley wisely hung it up, in order to go into the pizza business. You can have a little taste of Rawley if you visit Shaner’s Pizzeria (located in the former “Horsefeather’s” space in downtown Sarasota, Florida). 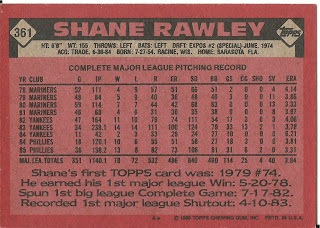 Rear guard: Rawley's first win came against the Rangers when he pitched a scoreless inning in relief of starter Glen Abbott. He won when the Mariners scored two runs in the 6th, breaking a tie. Rawley looks like he's doing a standing duck and cover pose on his first Topps card.
Posted by Jets Break Jaws at 8:09 PM