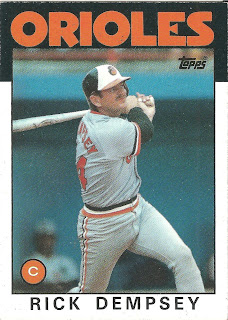 Card thoughts: Looks like an Expo sitting in the dugout, which makes this picture likely taken at West Palm Beach Municipal Stadium during spring training.

For 5 years, Dempsey’s only shot at the majors was as a September call-up for the Twins and the Yankees. Finally, in 1974, he became Thurman Munson’s primary backup.  Dempsey never hit much with the Yankees (his OPS over four years was a meager .605), but was well regarded for his defense and handling of pitching staffs. Many people around baseball at the time considered Dempsey's arm to be the best in the league, and he had the ability to shut down an opponent's running came, important in a time when runs were at a premium.

The Orioles, as always, had a great starting rotation, but had gone through several starting catchers since the beginning of the decade (Dave Duncan, Earl Williams, Johnny Oates, and Ellie Hendricks). They needed some stability behind the plate, especially with a roster of young arms beginning to supplant former rotation mainstays like Mike Cuellar and Jim Palmer.

To that end, Rick Dempsey was included in a massive trade with the Yankees, the principals being Rudy May, #196 Doyle Alexander, Ellie Hendricks, and Kenny Holtzman. Although in his first few years with the Orioles, Dempsey still was hitting in the low .200s, by 1978, Dempsey, getting more playing time behind the plate, raised his average to .259. 1978 would also be the only season Dempsey managed more than 100 hits.

Dempsey and the Orioles had a chance to average their World Series defeat in 1983, and wouldn’t let the chance pass. Despite hitting just .232 in the regular season (with his slugging percentage a mere .323), Dempsey would garner World Series MVP honors by hitting .386 (all his hits were for extra bases, hence the .983 slugging percentage). Some highlights in the series included doubling in the Orioles go-ahead run in Game 2, doubling twice against #120 Steve Carlton in Game 3, and homering and doubling in Game 5.

Dempsey was the glue that held clubhouses of a decade of Orioles teams together, partly because of his sense of humor. He especially liked to imitate, Babe Ruth, Jim Palmer, and Robin Yount, during rain delays (see this clip from 4:45-5:15 of him sliding all over the tarp).

In his later Oriole years, he even supplemented his low average with a little power (in 1986, he drove in only 29 runs, despite hitting 13 home runs). But good chemistry and better pop didn’t obviate Dempsey’s age. At 36, he simply did not have the mobility and range he once had at catcher, making his offensive limitations that much more glaring.

Dempsey has coached in the majors after retirement, serving as the bullpen coach with the Dodgers (1999-2000), and the bullpen and first and third base coach with the Orioles (2002-2006). As befits such a personable guy, he works as an Orioles broadcaster, and has his own well-designed Website. 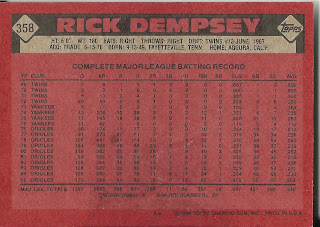 Rear guard: That is an ugly wax stain making it even harder to make out Dempsey's career stats.
Posted by Jets Break Jaws at 10:10 PM

I miss those wax stains...