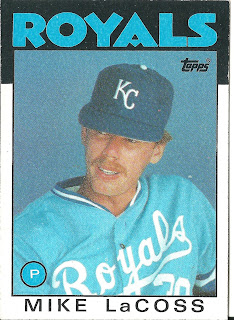 Card thoughts: Blue, blue, everywhere. This would be LaCoss’s only card in Royal blue. He has pretty goofy looking cards in 1981 and 1989.

The player: Mike LaCoss was a promising young pitcher for the Reds, who came on the scene right as the Big Red Machine was fading in the late 70s. He never fulfilled that early promise, however.

LaCoss’ key to success was his sinker, which kept the baseball in the ballpark. However, he did tend to get a little wild on occasion, and he didn’t have the strikeout as a weapon to get him out of trouble. After a 4-8 rookie campaign, LaCoss went 14-8 in 1979, earning him a trip to the all-star game (he pitched 1 1/3 scoreless innings in the game). But his bugaboo, the walk, haunted him in the NLCS that year, as he made it through just 1 2/3 innings against the Pirates, giving up 4 walks and 2 runs in a loss.

LaCoss really regressed the following two years as his ERA rose each year, ending up at 6.12 in 1981. But while the sinker was too inconsistent for a starter, the Astros felt it would be a good fit in a reliever. So the ‘Stros claimed him off waivers and put him in the pen in 1982. It was a fine year for LaCoss, as he sported a career low 2.90 ERA as the long man out of the pen. He was not as spectacular the following seasons, as he was the Astros main “swing man” in 1983 and 1984. He was a poor starter in particular, with less than a 1/3 of his stars being the quality variety.

LaCoss signed a contract with the Royals in 1985, but was sent to the minors in early August, and didn’t pitch at all in the post season. After another release, he found a home in San Francisco, where he revived his career with several good years as a part-time starter and reliever. Part of his success was no doubt due to learning the split finger fastball from #111 Roger Craig. Even his hitting improved, as he hit home runs in consecutive at bats in 1986. But the Giants got him for his pitching, and after a 10-13 record that year (with good peripherals), LaCoss was ninth in the league with 13 wins in 1987, helping the Giants reach the playoffs, where he pitched 3 scoreless innings in relief. By 1989, he was more of a reliever than a starter, but still got the start in Game 3 in the NLCS. LaCoss wasn’t good, as he spotted the Cubs three runs in the first three innings. But he was saved the loss when the Cubs bullpen couldn’t hold the lead.

LaCoss started his final year (1991) as a starter, but he was terrible in four out of five starts, including giving up 7 runs in the first inning on April 26. He wasn’t much better in relief as, incredibly, he gave up at least a run in each of his first 8 appearances. So LaCoss’s final game on July 2 was a fitting capstone to his year, as he gave up two runs at the end of a 8-4 loss to the Astros. 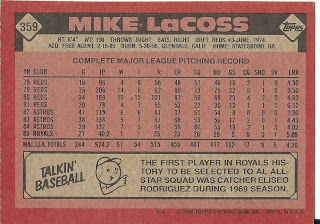 Rear guard: The "AL" is superfulous in the Talkin' Baseball write-up, and without the period, it looks like Al's All-Star Squad. Both outfielder Lou Pinella and pitcher Wally Bunker had better seasons than Rodriguez, who hit just .236 with an OPS+ well below average (78). However, he was hitting .260 in the first half. Rodriguez also made the squad in 1972, when he was more deserving of the honor. Here's his 1970 card, where's referred to as "Ellie".
Posted by Jets Break Jaws at 10:18 PM