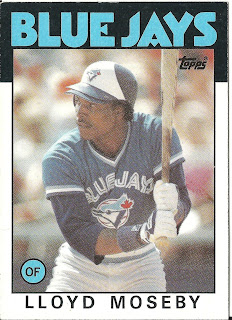 Card thoughts: This is a really big close-up of Moseby’s, well, closed-up batting stance. His nickname was “Shaker,” but he looks pretty calm to me.

The player: Moseby was the third of a trio of great young outfielders (#338 Jorge Bell and Jesse Barfield being the others). He did not have the sustained success those other two had, however.

Moseby’s first few years with the Blue Jays were a struggle, as he provided little power, speed, or ability to hit for average. He was, however, a superior centerfielder which kept his weak bat in the lineup. All that began to turn around in 1983 when Moseby hit .315 (almost 100 points better than the previous season), making it into the top ten in batting. The following season, he would lead the league in triples (15) and drive in 92 runs. One of the major reasons for his improvement is that he upped his abysmal walk rate from around 6% in his first few seasons, to about 10%.

By the time this card was issued, Moseby was an established star in Toronto. He also lived in infamy for stealing second base, then first base, the second base again on the same play in a game against the White Sox. However, that didn’t stop the American League from naming him to the all star team in 1986 (he walked and stole a base).

The following year was Moseby’s best overall season. He reached career highs in runs (106), home runs (26), runs batted in (96) and steals (39). After that, Moseby’s production slid and his numbers resembled those he put up in the early 80s. Some of that slide had to do with the pounding Moseby’s knees had taken for those years running on artificial turf. However, he did come through in the 1989 playoffs, as he hit over .300 in the ALCS, with a four runs scored.

Despite this performance, Moseby was not resigned after the season, and he ended up in Detroit, where he shared center field with #309 John Shelby. By 1991, he was battling a myriad of injuries (bruised heel, pulled hamstring), and had been moved to left field, ceding a lot of playing time to all-or-nothing slugger Pete Incaviglia.

Without a contract in 1992, Moseby elected to go to Japan where he slugged .579 for the Yomiuri Giants. A .246 average in part time play the following year led to his retirement. He later went back to the Blue Jays as a first base coach from 1998-1999. 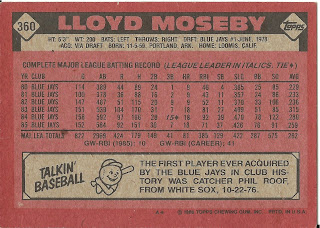 Rear guard: Roof joined the Blue Jays via trade. Since the Blue Jays had yet to participate in the expansion draft, they gave the White Sox a player to be named later for Roof. Larry Anderson, who was drafted from the Brewers, was sent to the White Sox  January 5, 1977. Roof didn't last long with the Blue Jays--he only played in three games and never got a hit. Here's his 1977 card, where he's airbrushed into a Blue Jays cap (it would be his last card).
Posted by Jets Break Jaws at 8:00 PM