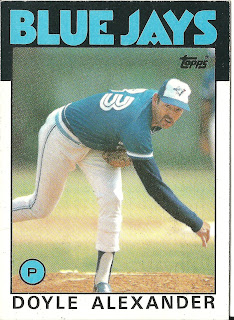 Card thoughts: That is a very awkward follow through. And mustache.
The player: Alexander was an incredibly inconsistent pitcher, who often pitched his best down the stretch. Once a hard thrower, arm injuries transformed Alexander into a guile pitcher. Other than a mediocre fastball, he threw a curve, change, slider, and sinker from three different arm angles. Besides his reputation as a clutch pitcher, Alexander was involved in two memorable trades, at either end of his career.
Alexander was drafted by the Dodgers in 1968 and was with the club within 3 years. He only lasted the 1971 season before he was traded to the Orioles with three other players for hall of famer Frank Robinson. He began pitching out of the bullpen, but by 1973 he was starting regularly. Alexander was a workhorse, completing 10 out of 26 starts to go with a 12-6 record. He lost his only playoff start.
Two seasons followed, where he bounced between the 'pen and the rotation. It seems the Orioles never knew what to do with him, and they traded him to the Yankees midway through the 1976 season. Alexander pitched much more effectively for them, going 10-5 the rest of the year.
But the Yankees would not enjoy his services long this time. Alexander signed as a free agent with the Rangers the next season, and had his best season to date, going 17-11 with a 3.65 ERA. But much like his time with the Orioles, the subsequent two seasons were marred by injury and sub-.500 records.
Alexander would be traded every year for the next four years. First it was to the Braves (a good season--14 and 11); then to the Giants (double digit wins again, 11 and 7, with a career low 2.89 ERA); then to the Yankees (where he broke his pitching hand punching a wall after being shelled by the Mariners); and finally to the Blue Jays in 1983, where Alexander would have his most consistent success.
Alexander was the top Blue Jay pitcher in both 1984 and the season shown on this card, winning 17 each year, and leading the league in winning percentage in the former year. His success did not translate in the ALCS in 1985, as Alexander gave up 10 runs in about as many innings over 2 starts, losing one of them.
He was traded back to the Braves in the middle of the next season, and he was generally effective with both teams, winning 11 and losing 10. In the offseason, Alexander was one of the free agents blocked by collusion, and therefore did not sign with the Braves until May. He was less than dominant for them, but that Braves team was REALLY terrible. Despite his 5-10 record and above 4 ERA, the Tigers coveted Alexander. He was the kind of big game, stretch run pitcher they needed in their tight race with his old team, the Blue Jays. To get him, they paid a heavy price by trading a minor leaguer named John Smoltz (who went on to win 213 games). Much like the trade of #183 Larry Andersen for Jeff Bagwell, it paid immediate dividends for the Tigers, but at a huge long term loss.
Alexander went an outstanding 9-0 down the stretch with a 1.53 ERA. This did not carry over into the playoffs again, much like in 1985. He lost two starts to the Twins, once again giving up 10 runs. There was a still a last hurrah for Alexander, as he went 14-10 in 1988, to make his first all star team at age 37. But there would be few cheers in his final season, as he led the league in losses with 18, and home runs allowed with 28. 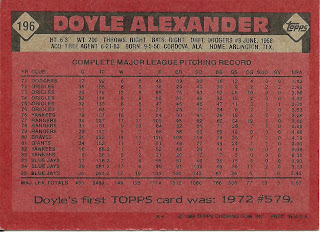 Rear guard: Because of the Topps card issuing policy in 1972, Alexander never appeared as a Dodger, even though he spent the 1971 season with them. Instead, Topps airbrushed him into some semblance of an Orioles uniform.
This date in baseball history: In 1985, Tom Seaver bests Walter Johnson by pitching his 15th opening day.
Posted by Jets Break Jaws at 10:25 PM