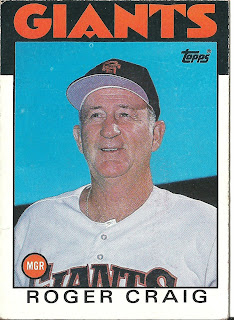 Card thoughts: I remember when I kept hearing about this San Francisco sports figure in the news. Turns out it was this guy. Not much to say about this photo, other than if you look at Roger Craig cards from the 60s, he pretty much looks like this. Must be the distinctive nose.

The manager: Craig was your classic swing pitcher, when that was still a common position on a staff. He generally pitched about half of his games as a reliever and half as a starter. He had one incredible year in this role, leading the league in shutouts in 1959 and sporting a miniscule 2.06 ERA. Unfortunately, as a player Craig is best remembered as one of the worst pitchers on the original Mets teams, leading the league in losses in both 1962 (24) and 1963 (22).

After his playing days were over, Craig became a well-regarded pitching coach. In fact, he is one of the fathers of the split finger fastball, having taught it to many of his pitchers. In 1978, he was finally given a shot to manage the Padres. He led them to an above .500 finish the first year, but in 1979, the team won 16 less games, and his contract was not renewed. He returned to his role as a pitching coach for the Tigers, including their World Series winning year of 1984. He was working in Tigers minor league system when he was hired to replace Jim Davenport for the last 18 games of the 1986 season. He was very successful as a Giants manager; all of his teams were over .500 until 1991. He won the division in 1987 and the pennant in 1989, losing the infamous "earthquake" World Series in the latter year against the A's. Craig is known for the expression "hum baby" which he applied to grinders, like third-string catcher Brad Gulden. I've never heard this phrase, but Giants fans seem to recall the phrase fondly. 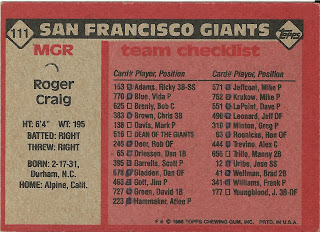 Rear guard: The major omission here is Gary Rajsich, who batted 91 times for the Giants. However, he was traded to the Cardinals mid-season (although he never made it back to the majors). Perhaps Topps was waiting for him to appear in a Cardinal uniform.
Posted by Jets Break Jaws at 8:37 PM

What on earth is the Dean of the Giants card?