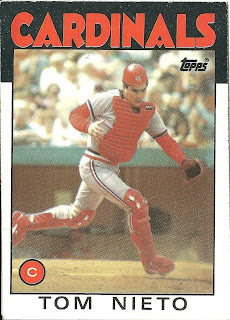 Card thoughts: Badly off-centered card. Which is a shame, because whoever was taking pitchers of Cardinals catchers this year was awesome. Just wait until later in the set when an even better card shows up. Anyhow, great shot of Nieto fielding a bunt at Dodger Stadium, dust and all. Note the old bill-less catchers cap and how thin Nieto looks for a catcher.

The player: This card is way more exciting than Nieto, the player. In the majors for his fielding and game calling abilities, Nieto brought almost nothing to the plate (except a wicked set of eyebrows). He hit .205 over seven seasons with the Cardinals, Twins, Expos, and Phillies. Nieto's "best" season was this one, his only season as a regular when he took over for aging former star Darrell Porter. He hit .225 and drove in 34 runs in a career high 253 at bats.

Nieto has been a long time minor league manager and major and minor league coach with the Yankees, Mets, Cardinals, and Twins organizations. 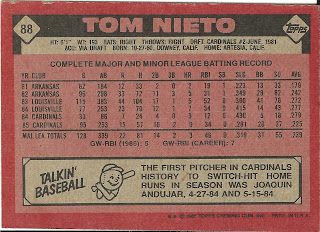