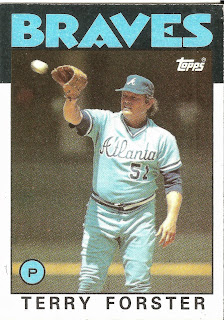 Card thoughts: Forster, who was once called a “Fat Tub of Goo” by David Letterman, is certainly showing the weight in this picture.

The player: Before being the most celebrated fat man in baseball, Forster was a star closer (or “Fireman,” in the parlance of today) for the White Sox. Unfortunately, both his weight, and wicked slider, led to a myriad of injuries.

Forster came directly into the league from A-ball, but at age 20, he saved 29 games.  They tried starting him in 1973, but he was back in the pen in 1974, with a league leading 24 saves. Arm trouble in 1975 led to an almost year long haitus. Further adding to his agonies, his brother was killed in a bar brawl in the off season, with Forster present.

When Forster returned in 1976, he found that Rich Gossage had supplanted him as the ace in the White Sox bullpen. The White Sox decided to put him back in the rotation, where his 2-12 record led to him being included with Rich Gossage in a trade to the Pirates. He was happy with the trade, partly because he was reunited with former manager #351 Chuck Tanner, and also because Forster was a good hitter and liked to swing the bat. He hit .346 his first season with the Pirates, but he was still battling arm fatigue, and was not much of a factor in his only season with the team.

A trade to the Dodgers improved his stock dramatically. Always a better pitcher in a spacious, grass park, Forster saved 22 games with a 1.93 ERA in 1978. Unfortunately, two more years of ill-health limited his effectiveness until 1982, when he pitched 83 innings and saved 3 games with an ERA just above 3.

The now portly Forster signed a big contract with the Braves in the off season, and his first season with them was a good one, as he saved 13 games with a 2.13 ERA. But Forster gained national notoriety when David Letterman called him a “fat tub of goo” in his opening monologue. Instead of getting angry, he went on Letterman and managed to one-up Dave on occasion and be very funny in his own right. Forster later sang the novelty song “Fat is In,” which I can’t find anywhere online, which is lucky for you.

Despite all the self-deprecation, Forster was concerned about his weight and slimmed down a bit after declaring free agency. He actually was worse in 1986 after the weight loss, as his ERA “ballooned” to 3.51 with the Angels (his new team). But he didn’t get injured, at least (although he did not appear in the post-season).

Still overweight, there was no uniform big enough for Terry when he signed with the Twins AAA team in 1987. One had to be specially shipped in from Milwaukee to cover his 260 pound frame.

A rarity among relievers, Forster hit an incredible .397 in his career, which, believe it or not, is the highest career batting average for a player with over 50 career at bats. In a typical self-deprecating comment, he insisted many of the hits broke his bats, and were the result of good luck. 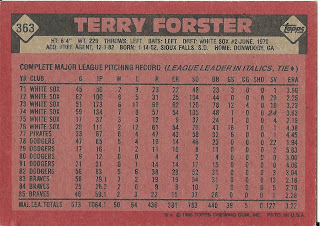 Rear guard: 210 pounds? I don't think so (which goes to show the vitals are always from the players rookie year. Don't believe them!)