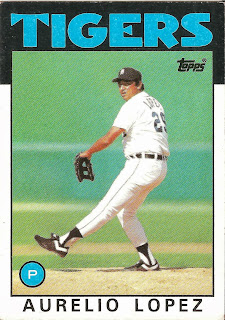 Card thought: This is the last time Lopez was appear as a Tiger on a Topps card. He was an Astro by the following season. Interesting note: Lopez’ previous two Topps cards show him in almost identical poses.

The player: Lopez was a star in the Mexican League way before he made it to the majors for good at age 30.  There’s even a statue of him in his hometown.

Lopez started in the Mexican minor leagues, but was soon promoted the “majors" in 1968, at age 19. He had several outstanding seasons in the Mexican League, leading the Mexico City Reds to the World Series in 1974, and winning 19 games in 1977 (as a closer!), earning MVP honors along the way. He was known in Mexico as The Vulture of Tecamachalco.

Lopez was first brought to the American “major leagues” while on loan from Mexico City to the Royals in 1974. Used for the stretch drive that season, he had a mediocre 5.63 ERA in 8 games. His contract was bought back by Mexico City, and he wouldn’t again appear stateside until the Cardinals bought him in 1978.

Permanently a major leaguer now, he was swifty traded to the Tigers after the season with Jerry Morales for Jack Murphy (never made the majors) and Bob Sykes (three mediocre years as a Cardinal). With the Tigers, Lopez’ career really took off. A 10-5 record in 1979 (to go along with 21 saves) earned him consideration in the Cy Young award race. He had a nearly identical year in 1980, establishing himself as one of the top relievers in baseball.

Despite his closing prowess, he shared closing duties with Kevin Saucier in 1981. It was good that the Tigers had Saucier in reserve, because Lopez was felled by shoulder problems for much of 1982. At one point, he quit the team after being sent to the minors for much of the year. One of the reasons Lopez gave was the Mexican economic situation, thought to have referred to the cratering of the Mexican peso, which led to the government to pressure Mexican nationals living abroad to retain their resources in the home country.

Regretting his decision, he returned to the Tigers 1983, despite being the first player to ever get his pay cut in arbitration. Lopez didn’t let that set him back, as he returned to form, going 9-8 with 18 saves. He was even more spectacular the following season. Considering that Willie Hernandez won the Cy Young as the Tigers closer that year, Lopez record of 10-1 with 14 saves and a 2.94 ERA really shows how strong their bullpen was.  In the playoffs, he pitched in three games and didn’t give up a run. Confusingly, Auerlio was referred to as Señor Smoke, the same nickname later given to teammate #47 Juan Berenguer.

But Lopez was now 36, and his arm was growing tired. The Tigers stumbled to a 84-77 record in 1985, and lack of bullpen depth was one reason. With Hernandez taking more and more closing opportunities, the aging Lopez was given middle relief duties and he struggled, putting up a 4.80 ERA. Granted free agency, he signed with the Astros and pitched two more seasons with them before retiring in 1987. During spring training of his last season, he got a DUI.


Lopez was so popular in Mexico, that he was elected mayor of his hometown of  Tecamachalco. During his stewardship, a municipal water and sewer system was developed. In the rough and tumble world of Mexican politics, the previous mayor’s loyalists shot up his house a couple of times, but Lopez remained mayor until his death in a car accident in 1992. Eerily, all three Auerlios in major league history died in car accidents in their mid 40s or early 50s. After his death, he was named to the Mexican Hall of Fame.

Still remembered fondly in Detroit, local band Electric Six named their 2006 album Señor Smoke in a tribute to him. 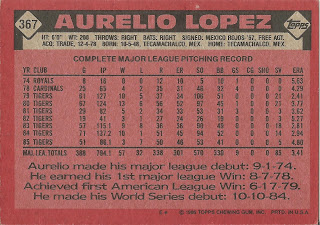 Rear guard: Note that the Mexico City "Reds" are correctly referred to as "Rojos" as the team that signed him first in 1967. Lopez' debut was a poor one. He pitched 2 2/3 innings and gave up 4 hits and 2 runs in relief of Steve Busby.
Posted by Jets Break Jaws at 9:57 PM

Good old Senor Smoke. a popular player from 84 Championship team is looked fondly upon now. May he rest in peace

Lopez was and always will be the only Señor Smoke. I recall being baffled when people started calling Berenguer that.