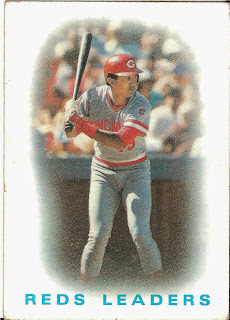 Card thoughts: The Reds were a team that finished second in the AL West in 1985 (89-72). Part of that is attributable to Rose's skill as a manager, as they had only a few standout players. But they were a well constructed team.


The player: Very dirty corners on this card. Of course, #1 Pete Rose and  #85 Tony Perez predate Davey Concepcion as Reds, but they left the team for a spell in the late 70s/early 80s. 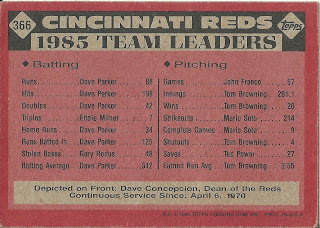 Rear guard: Dave Parker completely dominated the offense: He finished second in MVP voting, and he led the league in RBIs (most of his other totals were in the top ten as well).

Beyond the 1-2 punch of Tom Browning (who won 20 as a rookie despite a league average ERA) and Mario Soto (who would go on to have a much better career than browning), only #176 Jay Tibbs started more than 30 games. Kind of surprising to see #54 John Franco, who would go on to record over 400 saves, play second fiddle to #108 Ted Power.
Posted by Jets Break Jaws at 10:01 PM