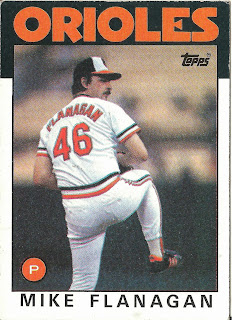 Card thoughts: Flanagan was one of those Orioles starters in the 80s (like #110 Scott McGregor or Mike Boddicker) who, unlike Orioles pitching stalwarts of old, seemed to have a triumvirate of peak years surrounded by years of injury/inconsistency.

The player: A star at the University of Massachusetts, Flanagan’s out pitch was the curve ball, which he threw sidearm to lefties. Although he was never known for low ERAs, his durability led to many wins for Mike, especially in the late 70s.
After making 10 starts the previous season, by 1977 Flanagan was a mainstay in the Orioles rotation, pitching the first of 5 straight years (excluding the shortened 1981 season) of pitching over 225 innings. His 15 wins that season, were followed by 19 the next year, as the durable Flanagan led the league in starts, and made his only all-star team on the strength of a strong first half (12-6, 3.53 ERA). Unfortunately, he faded down the stretch and despite the wins, he led the league in earned runs given up and his ERA was above the average.

The 23 wins he earned the next season (leading the league) were more aligned with his peripherals (his 3.08 ERA was a career best), as he helped power the Orioles to the World Series. For his efforts, he won the Cy Young award. In the World Series, he won Game 1 with a complete game, although he gave up 11 hits and four runs. Flanagan didn’t have as much luck in Game 5, although he pitched better overall, giving up just 2 runs in 6 innings.

The success continued for Flanagan in 1980, although it is debatable if he was an excellent starting pitcher, or just a decent one who got a lot of run support. In fact, his 16-13 record belied the fact that he gave up more than a hit per inning (278 in 251+ innings), and was giving up a lot of walks and wild pitches as well.

In his personal life during this time, came a bit of a milestone, as his daughter was only the eighth baby born in the United States using in-vitro fertilization in 1982 (and was the first to be born naturally, not via Cesaerian section).

Flanagan would be a pitcher who today would have trouble getting past the sixth inning, what with the high pitch counts and all, so the wins are a little deceiving. But Flanagan would remain a just-above-.500 pitcher, with greater than 10 wins a year until the season represented by this card, when he managed just 15 starts, and had an ERA over 5.


As went the Orioles fortunes, so did Flanagan’s. A star pitcher for a star laden team, by the late 80s the team was bad, and so was he. After a couple more years of inconsistency, he was shipped to the Blue Jays midway through the 1987 season for Jose Mesa and Oswaldo Peraza (who?). Down the stretch, he was 3-2 with a 2.37 ERA, but his acquisition did not propel the Blue Jays into the playoffs. In his first full Blue Jay season, Flanagan would go 13-13 and pitch over 200 innings for the last time. The Jays would finally make the playoffs during Flanagan’s tenure in 1989, but he was terrible in his only start, going 4+ innings and giving up 5 runs.

Released by the Blue Jays after the 1990 season (when he only made 5 starts), Flanagan had a last hurrah for the Orioles, as he made the team as reliever out of Spring Training. He got into 64 games and had a fine 2.38 ERA. Flanagan struck out Travis Fryman at the end of the year to record the last out in Memorial Stadium history. But in 42 games the next year, he had an atrocious 8.05 ERA, convincing him to retire.

After retirement, he held a variety of roles with the Orioles, including pitching coach, general manager, and broadcaster (a role held for three non-consecutive times). Here’s an example of his insight (note the New England accent).

Despite his success, it was noted early on that Flanagan had a sullen demeanor, and when he left the mound, whether the inning was good or bad, he would be brooding. Apparently, he never felt like a success, and his trademark self-effacing humor masked a constant feeling of insecurity. In proper proportion, this self-doubt can be a goad for an athlete to constantly push his or herself to greater heights. But it is dangerous to have too much self-doubt in baseball, because, as has been said, even the greatest hitters fail about 70% of the time, and pitchers will make at least 5 or more mistakes every start.

Struggling with depression for most his adult life, and facing an uncertain financial future (his intermittent employment with the Orioles being the cause of some of this angst), Flanagan tragically shot himself last year. Here’s a pretty good explanation of what led up to the suicide. 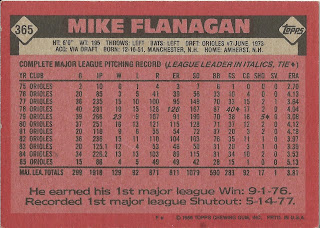 Rear guard: Flanagan's first win was against the Royals. He went the full 9, his only mistake was giving up a sacrifice fly to #344 Jim Wohlford in the fifth inning that scored Dave Nelson.
Posted by Jets Break Jaws at 9:14 PM