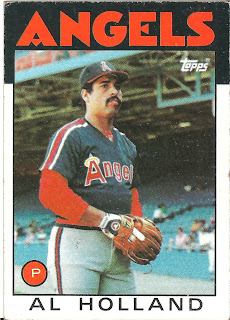 Card thoughts: This would be Al Holland's only card as an Angel, and last Topps card. Interestingly, I believe this photo was taken on the same day as the players he was traded with.

The player: Holland was a dominant reliever in 1982 and 1983, winning the Rolaids Fireman of the Year award in 1983 (I miss the prominence this award once had—it tallied saves, wins, and losses in relief, in a more complete assessment of a reliever). But like many players who happened to play on the Phillies or Pirates in the mid-80s, he was caught up in the Pittsburgh drug trials in 1985, forever tarnishing his name.

A rare fireballing lefty, Holland was an intimidating presence on the mound. Nicknamed “Mr.T” (for the amount of gold chains?), Holland burst on the scene in 1980, posting a 1.75 ERA in 82+ relief innings with the Giants. Although his ERA rose about a run each year he was a Giant, in 1982 at least, it was because he was tried as a starter early in the season, which didn’t go too well (2-3, 1.487 WHIP in 7 starts).

Despite his dominance, Holland wasn’t used much as a closer with the Giants. That all changed when he was sent to the Phillies in a block buster deal (with Joe Morgan) for #135 Mark Davis and Mike Krukow. The deal was a win for both teams, especially when Holland saved 25 games for the World Series bound Phillies in 1983. In the postseason, he gave up no earned runs, although a costly error behind him in Game 3 of the World Series led to a Phillie loss, which would turn out to be Holland’s last post season game.

Arguably even better in 1984 (29 saves, selection to an all star game), it all fell apart for Holland the season shown on this card. The Pirates were dumping salary, and he was sent to them for veteran #326 Kent Tekulve.  The Pirates had been awash in cocaine for the past several seasons, and Holland got caught up in the drug culture while there for 38 games (although, he’d apparently been using since his Giant days). Whether it was drug abuse, or the team’s realization that they were going nowhere in 1985, he was traded a second time to the Angels in another huge deal, involving previous blog subjects #140 John Candelaria, #190 George Hendrick and #114 Mike Brown.

This turned out to be a bad deal, with regards to Holland, for the Angels (although he had a 1.48 ERA in 15 games). Perhaps aware of his drug use, they didn’t attempt to sign him in 1986. The Yankees had that misfortune, and was suspended for 60 games at the beginning of the season. This prompted the Yankees to release and sign Holland 2 more times that season.

Through all the turmoil, Holland put up bad numbers in both 1986, and a brief spell in 1987. By August, he was through, his career derailed by addiction.

Holland has remained in baseball, last serving as a minor league pitching coach for the Johnson City, the Cardinals rookie league team. 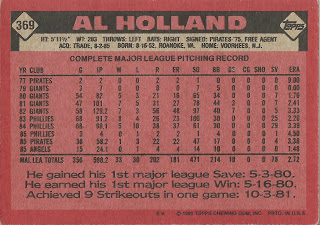 Rear guard: Strange, that Topps would cite a 9 strikeout game. Commonly, games of 10 or more strikeouts are considered "special". After being used as a reliever most of the year, Holland was put in the 4-man rotation at the end of the year. His 9 strikeouts came in an 8 inning no-decision against the Padres. Holland's final strikeout victim was pinch hitter Steve Swisher.
Posted by Jets Break Jaws at 10:00 PM