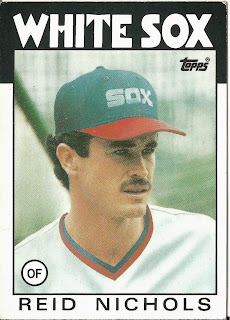 Card thoughts: Reid was a very unusual name in 1986. Of course, now tons of kids have it.

The player: Nichols was viewed as an up and comer by the Red Sox as a rookie. He hit .302 in a platoon role with Rick Miller, and showed flashes of power and speed. His OPS was again above average in 1983, when he hit .285. This led to a pretty big long-term contract (unusual for a reserve).  But with the signing of #255 TonyArmas, Nichols was received much less playing time. In a large part a defensive replacement in 1984, he hit just .226. When he started the season shown on this card with a .188 average, he was traded to the White Sox for #297 Tim Lollar.

The White Sox did not have the same dominant outfield as the Red Sox, so Nichols got more at bats after the traded. He swatted .297, and his OPS was on par with his better seasons as a Red Sock. However, he struggled again in 1986, leading to his release.  Nichols would finish his career as a reserve outfielder for the Expos.

Despite a career where he was a barely above replacement level outfielder, Nichols had enough baseball acumen that he has been the farm director for the Texas Rangers (1994-2000) and the Milwaukee Brewers since 2002. He’s been responsible for developing players like Ryan Braun, Corey Hart, Prince Fielder, Rickey Weeks, and Yovani Gallardo. Of course, he’s also been responsible for flameouts such as Mat Gamel. 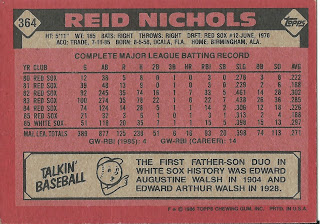 Rear guard: Wow. Unaware two Ed Walsh's pitched for the White Sox! The elder Walsh (Big Ed), has an awesome profile picture, and routinely pitched over 300 innings. One of the greatest pitchers ever, he's second all time with an incredible 1.00 WHIP, and his career ERA is a microscopic 1.82. Hard to believe it took the old timers committee to vote him in to the Hall of Fame.

Like many pitchers of his day, the elder Walsh blew his arm out by age 31 after winning 182 games. His son, on the other hand, was a really bad pitcher, with a career ERA above 5. He won just 11 career games