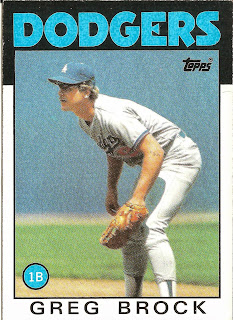 Card thoughts: Brock reminds me a little of #180 Don Mattingly in this picture.

The player:  Greg Brock unenviably had to fill Steve Garvey’s shoes after the former departed via free agency. And for a while, it looked like he would. In early 1983, Brock was hitting everything in sight, posting a .988 OPS the first month of the season. Unfortunately, Brock never hit that well again, ending up as a serviceable, but not spectacular, starting first baseman.

Like many Dodgers hitting prospects before him, Brock tore up the minors. Part of the reason was the top Dodger farm clubs were in the hitter friendly cities of San Antonio and Albuquerque. Brock never had a OPS under .900 in his four year minor league career, topping out with a .310/.432/.663 line at Albuquerque in 1982. But Dodger stadium (and the West Coast) is not the desert, and Brock’s power disappeared in the cool night air of LA.

He actually wasn’t terrible as a rookie, hitting 21 homers, and earning some votes for Rookie of the Year. But Brock was overhyped by manager Tommy Lasorda and announcer Vin Scully, perhaps to take some of the sting off the Garvey departure. This was unfair to Brock, and something he would never live down in Los Angeles. In the end, his .224 average didn’t remind anyone of Garvey (although his 83 walks were impressive).

A wrist injury in 1984 cut his playing time. When he recovered, Brock was sent to Albuquerque for a while due to a prolonged slump, but he was fully healthy by the time this card was issued. He did raise his average above .250 in 1985, but his power numbers were just barely above average for a first baseman (19 2B, 21 HR). Brock also hit terribly in the NLCS, swatting .083.

Brock was not with the Dodgers by the time they made it back to the playoffs in 1988, as he was traded to the Brewers for two key components of that team, pitchers Tim Crews and Tim Leary. Perhaps relieved to be out from under the shadow of Garvey, Brock turned in best major league season in 1987, with career highs in runs (81), hits (159), doubles (29), runs batted in (85) and batting average (.299). But ’87 was a hitters’ year, and Brock slumped to his career norms the following season.

Brock would spend the rest of his Brewer career as a replacement level player, battling injuries, and never again showing the potential he had finally realized in 1987. His days were numbered as a player when star #267 Paul Molitor was moved to first in 1991. Brock requested a trade, but there were no takers. Finally released a few months into the season, he spent a bit of time with the White Sox AAA club, where he had just 1 hit in 7 at bats before retiring.  The man that would be Garvey ended his career with a .248 average and a .737 OPS, poor numbers for a power position like first base. 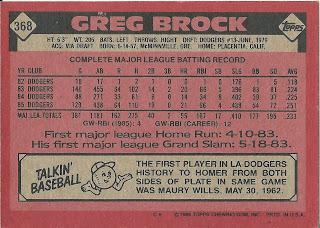 Rear guard: That grand slam was recently referenced on this Dodger blog, as a comparison to similarly touted prospect Jerry Sands, who also has struggled to live up to his billing as a Dodger.

Maury Wills should need no introduction. One of the premier leadoff men (and base stealers) of the 1960s, he never hit over 6 home runs in a season, and had only 20 in a 14-year career. But everything was going his way in 1962, when he won the MVP award. Of course, the hapless expansion Mets were his victims. Both of his home runs were solo shots, and one was an inside-the-park job. Oh, and Sandy Koufax was starting and gave up 6 runs and 13 hits in a complete game. That kind of overuse really killed his career.

Okay, this is kind of crazy. I was unaware that Maury Wills had not been issued a Topps card prior to 1967. The story goes that Topps didn't sign him to a "$5" card contract as a minor leaguer, because they felt there was no way he'd ever make the majors. By the time they realized their mistake, he had signed an "exclusive" contract with Fleer, resulting in this card. Which makes Topps "Turn Back the Clock" card from 1987, doubly hilarious, as they created a pretend card of Maury Wills from 1962 for use on the card!
Posted by Jets Break Jaws at 10:14 PM

Topps originally created the fake card for the 1975 Most Valuable Players subset.