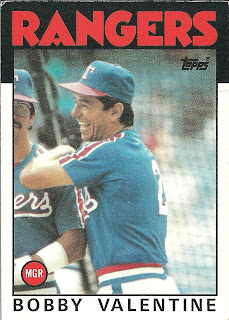 Card thoughts:  How is this for coincidence? The previous post mentioned that the player was in the running to replace Bobby Valentine as manager of the Red Sox. This is a testament to how small the fraternity of baseball really is, and how young (35) Valentine was when this picture was taken.  Little known fact: His wife’s father was pitcher Ralph Branca.

I believe that Valentine is joshing with Don "Sluggo" Slaught.

The player/manager: Valentine was just one of many hotshot hitters coming up in the Dodgers system in the late 60s and early 70s. It seems like every year, one would win the Pacific Coast League MVP award. Valentine was no exception, winning the award as a 20 year old in 1970.

Valentine spent most of his career as a utility infielder for the Dodgers, Angels, Padres, and Mets. His career ended prematurely at the age of 29 due to the lingering effects of a compound fracture on his leg suffered years earlier. He coached for the Mets in the 80s before he was named on my 10th birthday to be the manager of Rangers, who led the Rangers to a slow 9-23 start. He would manage the team until midway through the ’92 season, finishing over .500 five times, and coming in second in the AL West in 1986. With the Rangers, Valentine was loud, brash, and willing to try unorthodox things to get his players motivated. He was fired by future president George W. Bush, who owned the team at the time.

After managing at AAA for a year, Valentine went to Japan to manage for a year. He was recalled to the states by the Mets, who believed they needed a manager who would not be walked on by the players. After a year grooming him AAA, Valentine was installed as the manager for the 1996 season. He worked wonders with a talented, but previously under-motivated team, guiding the Mets to five straight winning seasons, the highlight being the 2000 Subway series with the Yankees (which they lost).

By now a familiar pattern, Valentine’s outgoing ways were lauded when the team responded with a winning record. But eventually the act (wrestling Carl Everett, fighting with Rickey Henderson, and (amusingly) sneaking back into the dugout in disguise after being ejected), became too distracting when the Mets were losing, so he was fired in 2002. The Mets organization probably never forgave him, after he made disparaging remarks (along with some insider gossip) about some his players to an audience at the Wharton School of Business.

Valentine then did something unprecedented. He went back to Japan and became the first non-Japanese manager to lead his team to a Japan Series title. Valentine did this despite his reputation of questioning some of Japanese baseballs long standing traditions.

He came back to America and worked as an analyst for ESPN for awhile. The Red Sox picked Valentine, who had the reputation as a quick fixer for troubled but talented teams, as their new manager for the 2012 season. Unfortunately, Valentine wore out his welcome a lot faster than ever had before. Public feuding with players, controversial comments in the media, and a team mutiny spelled his doom.

Valentine will now have more time to devote to his role as the Director of Public Safety in Stamford, Connecticut a role which he treats more seriously than its honorary designation would bear out. He also owns a sports bar/restaurant in town. 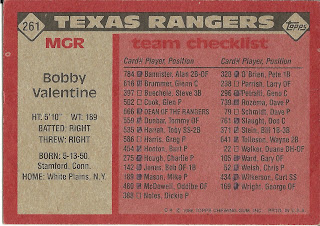 Rear guard: I must have gotten this card late in the year, because lots of the players are checked off.

No glaring omissions, although I don't remember Dave Stewart having a Phillies card in this set. Between the Rangers and Phillies he pitched 85 innings, however he pitched only 4 with the Phils at the end of the year. They could have issued a Rangers card and put one of those "Traded to the Phillies" messages on it.
Posted by Jets Break Jaws at 9:21 PM