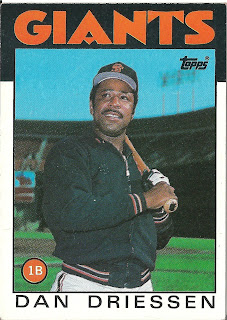 Card thoughts: There's some seriously weird color separation going on here. The grass looks radioactive. The sky is an unnatural shade of deep blue, considering how dark the field is. Likely taken the same time as the Ron Roenicke card earlier in this set.

The player: Dan Driessen started out as the regular third baseman for the Big Red Machine teams in the mid 70s. While his on base percentage and average were high, he lacked the power generally sought in a corner infielder and he was a terrible fielder. He was reduced to a utility role in the 1975 and 1976 seasons when Pete Rose was switched to third. He returned to a starting role in 1977, filling some big shoes after star first baseman Tony Perez was traded to the Expos before the season. Driessen responded by having a career year, hitting 17 home runs and driving in 91 while stealing 31 bases and hitting .300. He would go on to have several more solid years for the Reds, driving in about 70 runs a year and fielding his position admirably, leading the league in fielding percentage in 1978, 1982, and 1983. However, his batting average struggled to get above .260, though he still got on base a lot, leading the league with 93 walks and 6 hit by pitch in 1980. When his power numbers began declining in the early 80s, Driessen was traded (like Perez before him) to the Expos for pitcher Andy McGaffigan in the middle of the 1984 season. Another midseason trade during the year represented by this card brought him to the Giants where he shored up first base, which had been split between ineffectual David Green and Scot Thompson. He would play sporadically in 1986 and 1987 with the Astros, Giants and the Cardinals before retiring at age 37.

Dan Driessen was the first designated hitter in National League history, filling that role in the 1976 World Series when it was used for the first time in post season play. He is the uncle of former first baseman and Cubs hitting coach Gerald Perry. 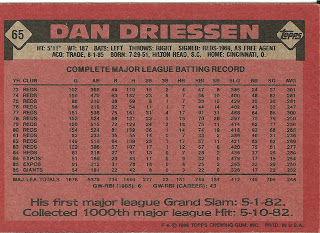 Rear guard: There's an error on the back of this card. It does not show Driessen's league lead in walks in 1980. As a kid, this is what I looked for to determine "good" players. So all these years, I just thought Driessen was some boring common(er). For shame Topps! Scrub or not, Driessen had several milestones in 1982. His grand slam came off the Cardinals' Jim Kaat, who was pitching in relief of Andy Rincon. Driessen also drove in another run off of Kaat with a triple.
Posted by Jets Break Jaws at 3:34 PM