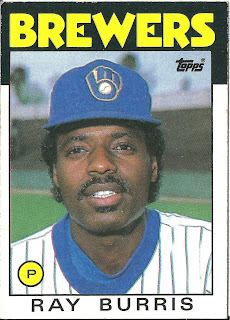 Card thoughts: Burris has this expression on a lot of his cards.

The player: Despite having a mediocre record in the mid 70s the Cubs developed a number of fine pitchers. Most would be traded away early and have success with other teams. Burris is the exception to that rule. As a young man, he won 15, 15, and 14 games for some miserable Chicago teams from 1975-1977, despite giving up lots of home runs and hits. Unfortunately, the Cubs overused him and he became ineffective by the late 70s. After being traded 3 times in 1979, Burris became a fifth starter and swing man for the Mets, Expos, and A's. He pitched a 5 hit shutout over the Dodgers in the 1981 playoffs while with the Expos. You can read his account of this game here.

He had his best season in a long while in 1984, winning 13 games while losing 10 with his second lowest career ERA. This record encouraged the Brewers to trade aging hall-of-famer Don Sutton to the A's to get him. But that would be Burris' last good year. He was ineffective for the last three years of his career for two different teams (Brewers (twice) and Cardinals).

He was actually retired, and serving as the Brewers pitching coach, when injuries pressed him back into action in 1987. He would later work in the front office and coach for the Brewers, Rangers, Cardinals, and Tigers organizations. He's currently the Tigers AA pitching coach. 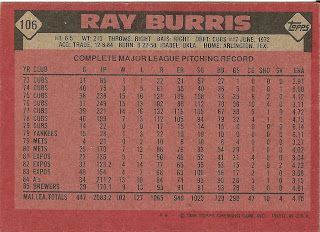 Rear guard: That's not a badly scanned card. That card is badly miscut. Look at the flip between the won-loss records in 1984 and 1985 for Burris. Oof, that was a bad trade for the Brewers.
Posted by Jets Break Jaws at 7:06 PM