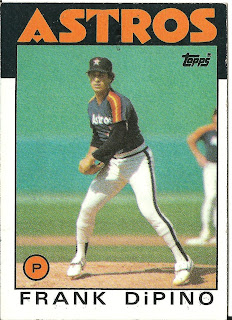 Card fact: This is Frank DiPino's third Topps card. It's also the second in-action card in a row.
Card thoughts: There's a lot of weirdness in this picture. There's the spring training dark rainbow uniform. Those futuristic shoes with the huge velcro clasps (remember when velcro was going to replace shoelaces?). The odd angle of DiPino as he delivers a pitch and he moves side-to-side (?).
The player: Frank DiPino came up with the Brewers, but he didn't last long. As part of a blockbuster deal at the end of 1982, he was traded along with future Astros star Kevin Bass for Don Sutton. As a rookie a couple of years year the trade, DiPino had his best year as the left half of the Astros closing team with 20 saves and a 2.65 ERA. He finished 6th in rookie-of-the-year voting that year. He only had one more year as a closer for Astros, but afterward became a decent middle-reliever Cubs, Cardinals, and Royals. He came to the Cubs for pinch hitter/runner Davey Lopes. If I remember DiPino at all as a Cub, I vaguely remember him coming into a game for Shawn Boskie or some other middling starter. 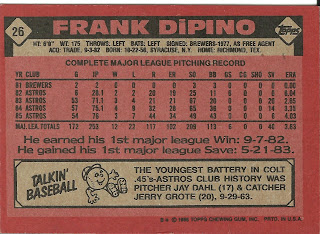 Rear guard: Jerry Grote went on to have a long, successful major league career. This appearance in the majors was the only one in Jay Dahl's career. He injured his back the next year and played the outfield in the minors. The following year, when he was 19 he died in car accident while pitching in the Western Carolinas League. Frank DiPino's win came as starter when he struck out 10 Padres in 5 innings to lead the Astros to 4-3 win.
Posted by Jets Break Jaws at 9:14 PM

i remember him and grace couldn't stand each other when they played together on the cubs. dipino left and then hit grace with a pitch in 1989 and they brawled, sending grace to the DL for a few weeks. when he came back, he was on fire and led the cubs to their 89' division title. good times.