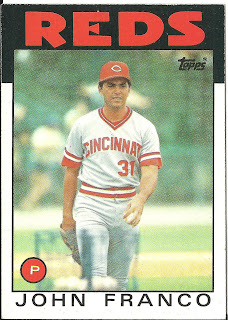 Card thoughts: Wow. A really young John Franco, without the thick, trademark mustache that marked his Mets years. I believe that's a basket of balls in front him. He's either pitching batting practice, or most likely some doing kind of pitching drill in spring training.

The player: Franco may be the best left-handed reliever in the history of the game. 4th on the all-time saves list, he led the league in saves in 1988 (39), 1990 (33), and 1994 (30). He neither walked, nor struck out many people in his career. Never an overpowering reliever, he relied on a screwball to get batters to pound the ball into the ground. At this point in career, however, he was the lefty closing counterpart to right-hander Ted Power, and he had as many wins (12) as saves. A four-time all-star, Franco would be best known as a Met, the team who acquired him in 1991 for Randy Meyers, a mutual beneficial trade of closers. Franco would end up pitching 21 seasons, ending his career with the Houston Astros in 2005. 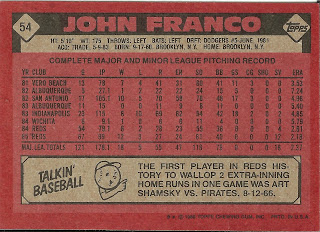 Rear guard: Art Shamsky, one of the coolest names in major league history, came into the game in the 7th inning as part of a double switch. He actually hit 3 home runs in the game while driving in 5. Despite these late game heroics, the Reds would lose the game in 13th inning. Shamsky only hit 68 home runs in his 8 year major league career.
Posted by Jets Break Jaws at 4:55 PM