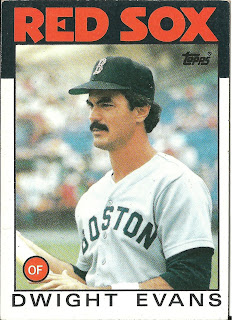 Card thoughts: The Boston Red Sox were my "backup" team as a kid, as they bore many similarities to the Cubs in terms of their historic futility (at the time). Of course, this charming franchise now is about is insufferable as the Yankees due to the endless fluffing of the team by ESPN, it's legions of obnoxious, arrogant "superfans," and that stupid Sweet Caroline song. But they were my American League heroes at the time, and I was especially upset when they lost the World Series to the hated Mets in '86. I was excited to get Red Sox cards in this set, and this is one of them, probably due to the fact that this picture could have been taken in 1960.

I consider the Evans 'stache one of the most famous mustaches of '85. Second only to Keith Hernandez among position players. Evans has the perfect facial features to pull off a mustache. Take note, hipsters of today with your wispy, middle school mustaches. This is how it's done properly!

The player: Dwight "Dewey" Evans was one of my favorite players on the Sox, probably because of his steady, no nonsense play and amazing arm in right field. Evans was originally in the lineup for his glove. He won eight gold gloves, playing Fenway's tough right field. He made a famous play in the 1975 world series where he robbed Joe Morgan of a double and doubled off Ken Griffey Sr, saving the series (for a time) for the Red Sox. Just watch this incredible play. He always hit decently, consistently hitting about 10-15 home runs and driving in 60 or so runs throughout the 70s. It really wasn't until the 80s, however, that Evans became a force at the plate. He led the league in home runs with 22 in 1981 (the strike shortened season) and after that never hit less than 20 home runs in the 1980s. He scored over 100 runs in 1982 (122) and 1984 (a league leading 121), and drove in over 100 in 1984. His better numbers in his 30s can be attributed to having a greater understanding of the strike zone. He led the league in walks in 1981 and during the season shown on this card.

Evans ended up playing the second most games ever for the Red Sox, just behind Yastrzemski. Statistically, he compares favorably to hall-of-famers Al Kaline, Tony Perez, and Billy Williams, although I would say that Evans is just a notch below a hall-of-famers, due to his good, not great, offensive numbers in the early and mid-70s. Evans' charity is neurofibromatosis, a disease where the body forms numerous small tumors just below the skin, which can compact the nerves in the body. Both of Evans children have the disease. 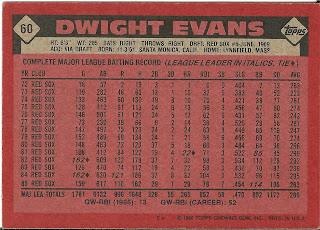 Rear guard: I got nothing, other than you don't see many baseball cards today that have a player playing that long for one team. Evans would play with the Red Sox until 1990, finishing his career with the Orioles in 1991.
Posted by Jets Break Jaws at 1:13 PM