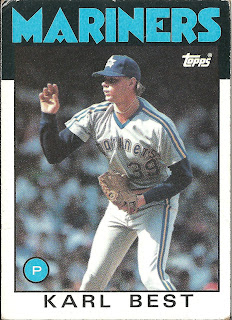 Card thoughts: Such an odd follow through. Best looks like he's putting a hex on the batter. Not as odd as this horrendous mug shot though.

The player: Best is an unfortunate name for an athlete. If he's anything but the best, the name kind of sticks in your craw. And Best was far from the best. A local boy, Best spent several mediocre years in the minors before somehow making it to the majors for a cup of coffee in 1983 and 1984. The year shown on this card was his "best." He had a wonderful 1.95 ERA in 32+ relief innings, striking out 32 while only walking 8. He pitched another 35 innings for the Mariners the following year, before finishing his career with the Twins in 1988. Best was twice traded to teams he never played a game for: the Detroit Tigers and the San Francisco Giants. 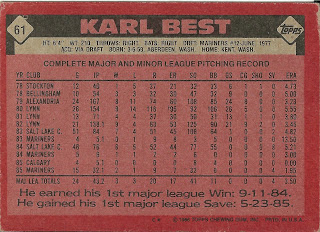 Rear guard: Best got his first major league win by getting Texas outfielder Billy Sample to fly out to left in the 9th inning with the team losing 3-2. The Mariners would win the game in their half of the 9th on Danny Tartabull's single.
Posted by Jets Break Jaws at 10:47 PM