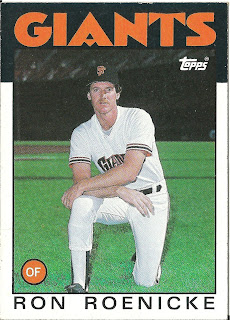 Card thoughts: All that's missing is the soccer ball and team trophy

The player: Roenicke played 8 seasons in the majors, mainly as a pinch hitter/defensive replacement in the late innings. He never lived up to the promise of being the first round draft pick of the Dodgers in 1977. With a .238 career average, he was a better defender than hitter.

Roenicke is in his first year managing the Brewers, after "graduating" from the managerial school of Mike Scioscia, regarded as one of the best managers in the American League. He replaced Joe Maddon, current Rays manager, as the Angels bench coach in 2006. 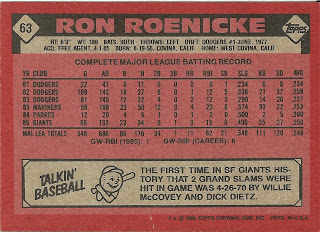 Rear guard: I believe that is "a" game Topps. Every one knows Willie McCovey: hall-of-famer, good Samaritan. Dick Dietz? In 1970 he would hit 22 home runs, drive in 107 runs and have .941 OPS at age 28. He would hit 23 home runs the rest of his career, which only lasted three more years.
Posted by Jets Break Jaws at 5:29 PM