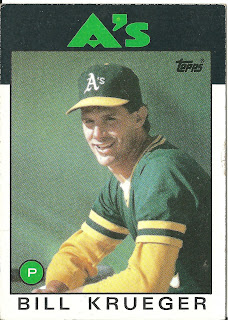 Card thoughts: Krueger should be happy. Not many American non-drafted players ever make the majors (although his record this season is nothing to smile about)

The player: Krueger is definitely a study in perseverance. A basketball player in college, he won 15 games with AA West Haven in 1983, prompting his call-up to the A's. He would go on to play for 13 seasons, mostly as an emergency or 5th starter for a whole host of teams: The A's, Dodgers, Brewers, Twins, Padres, Tigers, Mariners (twice) all needed Krueger at sometime or other. He could give a team a .500 record and an ERA just north of 4. He had a few good seasons, winning 10 games with the A's in 1984, and 11 for the Mariners 7 years later, but most teams were content to stash him at AAA, in case of an injury.

Krueger is currently a financial advisor for Morgan Stanley Smith Barney. He also moonlights as a baseball analyst on Fox Sports Northwest. He is an advocate for autism research. Here he is discussing his child's autism. 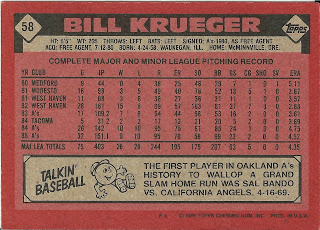 Rear guard: The "Talkin' Baseball" blurb is a little disingenuous, as the A's had a long history as a franchise (since 1901!) before moving to Oakland. But Sal Bando was one of the first stars after the A's moved to Oakland in 1968. He was one of the "character" guys who led the A's World Series teams from 1972-1974.
Posted by Jets Break Jaws at 10:28 PM