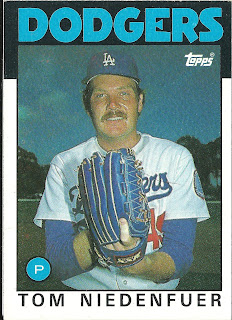 Card thoughts: Growing up, this guy looked like every dad in my neighborhood after he finished mowing the lawn. All that's missing is a can of Sterling beer.

The player: Niedenfuer was an excellent reliever for the Dodgers through the season portrayed on this card. With ERAs generally under 3, Neidenfuer worked with Steve Howe to make the early 80s Dodgers bullpen quite formidable. Thrust into the main closer role after Howe was suspended for drugs during the 1985 season, Tom had his best season with a 4 to 1 strikeout to walk ratio (102 strikeouts, 24 walks in 106.1 innings) and 19 saves. Unfortunately, in the NLCS that year Niedenfuer blew two winnable games for the Dodgers, once by giving up a game-winning home run in Game 5 to the punchless Ozzie Smith, and the crusher, a three-run blast by Jack Clark in Game 6. This seemed to effect his confidence, for in subsequent seasons his ERA was never below 3.50 and he saved less and less games. He ended his career as a journeyman middle-reliever, playing with the Orioles, Mariners, and Cardinals until 1990.

Niedenfuer is also an example of some of the side benefits of playing baseball, especially in LA. Nicknamed Buff for his big head, Niedenfuer's average looks were still enough to snag D-list starlet Judy Landers, Playboy cover model and stars of such films as Stewardess School , Dr. Alien, and Hellhole. She was also the dumb blond on several popular TV shows in 80s including Knight Rider, Vegas, and Love Boat. 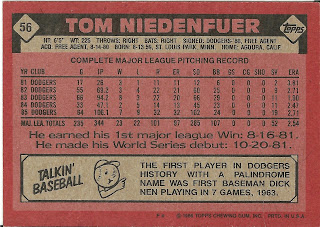 Rear guard: Niedenfuer won his first game while pitching two innings of scoreless relief for Fernando Valenzuela against the Atlanta Braves. He struck out 1 and walked no one. Can anyone guess what paindrome Dick Nen makes?
Posted by Jets Break Jaws at 6:09 PM