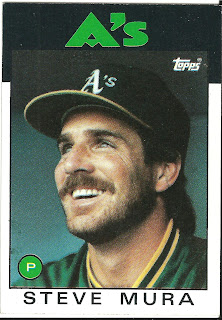 Card thoughts: I really like the lighting on some of these A’s cards. The dark green of the A’s name really matches the dark coloring of these photos. Also: this is another card and player I have no recollection of. Who is Steve Mura?

The player: Well, this would be Steve Mura’s last Topps card, which is probably why I don’t remember him. Mura was a journeyman pitcher who pitched with the Padres, Cardinals, White Sox, and A’s in his seven year major league career, only making a positive mark on the World Champion 1982 Cardinals.

Mura was no great shakes in the minors, as he was an innings eater, but tended to walk a ton of guys and sport high ERAs. And although he won in double digits, he also lost at the same rate.

There must have been something abut his arm that the Padres liked, because he was brought up in a bit in 1978, and a lot more in 1979 where he was effective. mostly out of the bullpen, where he had a 3.08 ERA with 2 saves in 73 innings.

Unfortunately, the Padres attempted to make him a starter and after a decent 1980 season,  he was horrific in the 1981 season, leading the league in losses and only winning 5 games.

Mura was part of a huge deal to the Cardinals that also included recent post subject #278 Sixto Lezcano (this was the deal where the main players were #90 Garry Templeton and Ozzie Smith). He would have his best season in 1982, going 12-11. But at closer glance, Mura benefitted more by having a more potent offense and defense behind him rather than any better pitching (although Mura credited the turnaround to ditching a slider in favor of a curve-cutter combination). His ERA and WHIP were similar to the previous season, when he lost 14 games, and he actually had a worse strikeout-to-walk  ratio (80 walks, 84 strikeouts). This led to Mura being left off the post season roster, so although he got a World Series ring, he didn’t contribute in the series.

In a transaction you don’t see anymore, Mura was chosen as the “free agent compensation pick.”  Initially, the White Sox picked Rudy May from the Yankees, but he was ineligible. Mura was compensation for the White Sox losing Steve Kemp to that team.  When informed about the loss of Mura, Cardinals manager Whitey Herzog reportedly shrugged and said “big deal.”

Well, Whitey was right, and Mura barely contributed to the White Sox division crown. In a scant 12 innings, he threw 5 wild pitches and walked 6. For this, he was banished to minors. Despite this evidence of his ineffectiveness, Mura criticized manager Tony La Russa and pitching coach Dave Duncan for not using him in the starting rotation. Once demoted to AAA Denver, matters didn’t improve as he lost 11 games.

He spent the entire 1984 season at AAA Portland where was once again pretty crappy. But a good start to the season at Tacoma, the A’s top farm club, convinced them to bring him up and have his picture taken for this card. Mura is an odd choice for a card in this set, as he only ended up pitching 48 innings. Perhaps it’s because rookie Tim Birtsas refused to sign a contract for a Topps card that season, and Mura was the last minute substitution. At any rate, this season would be the end of his professional career. 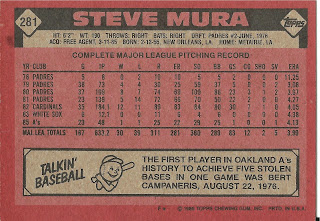 Rear guard: Bert "Campy" Campanaris (airbrushed as a Ranger on the card representing this season) rose to prominance in the 70s by being an integral part of the A's dynasty. He led the league in steals 6 times, and his 54 steals in 1976 were the most since 1969. Campanaris actually only stole one base the day cited in the "Talkin' Baseball" box. The five steals actually came on May 24th of that year against the White Sox.

With 649 career stolen bases, he has stolen the 14th most bases in history.
Posted by Jets Break Jaws at 4:18 PM

I always liked this card, too.