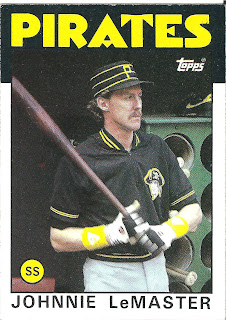 Card thoughts: This picture looks like it could have been taken in 1910. LeMaster bears a striking resemblance to many of the players featured on the “Old Judge” Tobacco cards. LeMaster also hit like a shortstop in the teens. It is pretty lucky that Topps got him in a Pirates uni, as it was the third team he played for that season (all finished last).

The player: How does a player like LeMaster play for 12 years in the majors, many of them as a starter? He hit only .222 in his career (and got on base at a morbid .277 clip while “slugging” .289), and had many seasons when he barely hit .200, despite getting over 400 plate appearances. But in the pitching dominated late 60s/70s/early 80s, it wasn’t expected that shortstop produce much with the bat, only that he could make the plays.

Some still believe Johnnie was one of the worst players ever. Conversely, there is a Giants site named "The Sons of Johnnie LeMaster."

LeMaster played 11 seasons for the Giants during their most fallow period ever, when it came to post-season appearances. His first plate appearance would fool Giants fans into thinking that this was an exciting player. LeMaster tied a major league record by hitting an inside the park home run in his first at bat.

After showing absolutely nothing with the bat between 1975 and 1977 (low light: .149 in 135 at bats in 1977), the Giants inexplicably handed LeMaster the starting shortstop job in 1978. He soon became known as “Johnny Disaster” as he had a penchant for committing costly errors in close games. As such, LeMaster was soon a target of derision by the few Giants fans that were showing up to Candlestick in the late 70s. Showing he had a sense of humor, he wore “Boo” on his back in a game in 1979, mocking his detractors.

Despite rarely hitting above .215 and being an average to below average fielder, LeMaster continued to man the shortstop position for the Giants until 1985. Low lights include a .533 OPS in 1982, and not being able to manage over 100 hits until 1983, despite being a starter for much of that time. Although a terrible player, LeMaster had one brief moment when he was actually average. The Giants inserted him into the leadoff spot in 1983, and he responded with career highs in just about every offensive category. LeMaster even stole 39 bases, good for 7th in the league (he also scored 81 runs, almost 40 more than his next highest total).

Unfortunately, that success didn’t last. LeMaster slumped to a typical .217/.265/.282 line in ’84, and he was traded to the Indians early in the 1985 season (after going hitless in 16 at bats) for Mike Jeffcoat and Luis Quinones. LeMaster wasn’t much better for the Indians. He wasn’t versatile enough to become a utility man, and he wasn’t much use as a backup shortstop considering his below average fielding. A .150 average in May convinced the Tribe to quickly get rid of LeMaster, and they actually got a useful player from the Pirates for him (which just goes to show that poor personnel decisions are not just a modern Pirate phenomenon). He “raised” his average to .155, but even given how terrible the Pirates were at shortstop that season (Sam Khalifa and #48 Bill Almon also started a bunch of games at short), there was no way the they were going to retain his services after the season.

LeMaster is an elder in the Church of Christ in his hometown of Paintsville, KY. He's a bit of a zealot, apparently, as he got the town to go dry. LeMaster tried to run for mayor as a write in candidate a couple of times but lost. 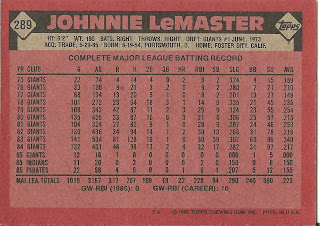 Rear guard: Most kids seeing these stats on the back of a card when opening a pack in 1986 would have immediately stuck it in the spokes of their bike. Me, I was a collector, so I valued any card I didn't yet have, no matter how crappy the player was (hence, the near mint condition of this card!).
Posted by Jets Break Jaws at 12:22 PM

you are so well researched,,,great job as always,love reading your work

I'm replaying the 1984 season using Statis Pro Baseball - and every game I pencil him in I ask myself, "this is really the best they had to offer?" I use him for a lot of sac bunt attempts...

Thanks for the historical biography...One of my favorite players as I learned baseball - and did so as a San Francisco Giant fan...Johnnie LeMaster ALWAYS displayed all the characteristics of a ballplayer who CARED...he always showed his ardent effort. Maybe that #1 draft position made that impression fade in comparison to the statistics, but the guy loved the game. Thanks to you and good ol' #10! SFDan

As a Giant fan, I could never understand what their infatuation was with him. There really were so many other options they could have gone with in those times. The ultimate insult had to do with this card. His was the last card I needed to complete the '86 Topps Set. Being the purist I was back then, I couldn't just buy that card, I had to find it in the pack. Once again, Johnnie stuck it to me.