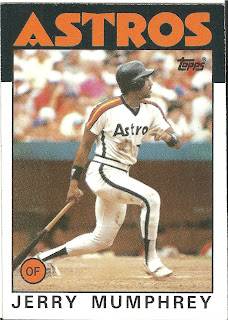 Card thoughts: I always loved Mumphrey as a Cub. Because I knew him primarily as an extraordinarily skilled pinch hitter, I was unaware of his stellar previous career as a starter until researching this blog. This is another card missing the gloss on the front.

The player: Mumphrey’s career was a model of consistency. He hit equally well from both sides of the plate; generally came close to a .300 batting average; and had really good range in centerfield, despite taking some awkward routes to balls in the alley. As the scouts said, “he never gets too high, never gets too low.”

Mumphrey had cups of coffee with the Cardinals in 1974 and 1975 before he became the team’s fourth outfielder in 1976. He got a significant amount of playing time in 1977 when centerfielder Tony Scott went down with an injury in August. He played in 145 games and hit .287 with 10 triples and 22 steals that season, despite not being a regular at any one outfield spot.

Despite Mumphrey’s speed and consistent hitting, he never found a regular outfield position, perhaps becaue he was mostly a singles hitter. In 1979, he lost his speed completely, only stealing 8 bases, while being caught 11 times. With still no regular spot for Mumphrey to play, and his one plus skill seemingly fading, the Cardinals traded him to the Indians with John Denny for perpetually disgruntled outfielder Bobby Bonds. He wouldn’t play a game for the Indians, however, as he was sent to the Padres before the 1980 season began. Mumphrey finally got a chance to be a regular centerfielder, and he had his best season to date, upping his steals to 52--an over 40 steal gain! He still showed little power, however, as his slugging percentage once again failed to reach .400.

The Padres, for some reason, traded Mumphrey after the season to the Yankees for pitcher Tim Lollar (who had one great, and a few other good, seasons as a starter for them), Ruppert Jones (an inferior replacement for Mumphrey in center), #52 Chris Welsh (a bad starter for the Padres), and Joe Lefevre (career Padres average: .248 off the bench).

With the Yankees, Mumphrey had his most consistent success. He even made the top 20 in MVP voting in 1981, which is more of a function of the historic New York bias in the voting than his stats that season. In 1982, he had another good season, as he became a more all-around offensive force. His 143 hits included 24 doubles, 10 triples, and 9 home runs. For the season, Mumphrey batted an even .300 and stole 11 bases.

But Mumphrey was soon gone from the Yankees. Mercurial owner George Steinbrenner and perpetually angry manager Billy Martin complained in the off-season that Mumphrey didn’t take charge enough in centerfield, and that he was intimidated by right fielder #70 Dave Winfield. Mumphrey failed to change Martin’s opinion after the season began, and he was traded to the Astros in August for fellow disgruntled centerfielder, Omar Moreno. This was one of many bad trades the Yankees made in the 80s, as Steinbrenner hated any player he did not deem a winner, despite their statistics—and this included Mumphrey.

Well, Moreno would only hit .250 in three seasons with the Yankees, while Mumphrey would become an all star in 1984 on the strength of driving 52 runs in the first half of the season and hitting .282. In his one all-star at bat, he struck out. For the season, Mumphrey was his usual consistent self, generally driving in about 10 runs and never hitting below .265 in any month. With a .301 average in the second half, Mumphrey finished his career year by hitting 9 home runs, driving in 83, and hitting .290.

But he was getting old. Mumphrey was moved to right field in 1985 to save his legs, and, despite hitting 8 home runs and driving 62 (pretty good, considering he played half his games at the pitcher friendly Astrodome), he was traded to the Cubs for #46 Billy Hatcher. This trade worked out well for both teams, despite the fact that Mumphrey only had two good years left.

He was back in his old role as a fourth outfielder with the Cubs, but he was most effective off the bench as one of the best pinch hitters in the league (a luxury on a team as bad as the Cubs). 1986, he hit .344 off the bench with 1 home run and 6 runs batted in (and the season, he batted over .300). Mumphrey was even better in 1987, where he reached career highs in home runs (13) and batting average (.333). Two of those homers came off the bench, to go along with 9 RBIs and a .343 average.

But the Cubs got greedy. They attempted to turn Mumphrey exclusively into a pinch hitter in 1988, but he could never find his stroke. He left the league with a whimper, rather than a bang, squeaking out only 9 hits and a .136 average in his last season.

His post baseball career has been anything but rosy. Along with former major league outfielder #182 Bobby Brown, Mumphrey had started a food distribution business, Major League Food Services in 1986, while still a player. They supplied food to Atlantic City casinos, taking advantage of state-mandated minority set asides, but left a trail of unpaid bills in their wake, a problem compounded by an employee embezzling a bunch of money. 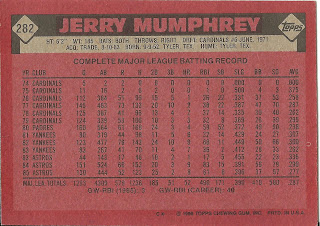 Rear guard: Since there's no info on here, I'll just tell you about Mumphrey's first major league game. He pinch ran for Keith Hernandez in a game against the Phillies. He was stranded at first when #98 Dick Ruthven struck out pinch hitter Jim Dwyer.
Posted by Jets Break Jaws at 9:04 PM